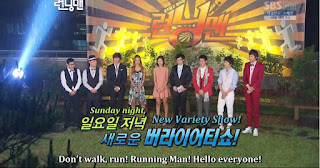 In this first episode, Running Man members gathered on the roof of the SBS building to start the opening, they greeted each other and unexpectedly the rain began to fall but they still continued shooting.

Yoo Jae Suk introduced Running Man members one by one, but the rain was getting heavy and the opening was done quickly they introduced themselves while pouring rain, after a while the rain stopped, at the end of opening Ji Suk Jin made all the members laugh because he used the old style at that time he said "Running, Man, Bang", that was a pretty interesting start to start a new Variety Show entitled "Running Man". 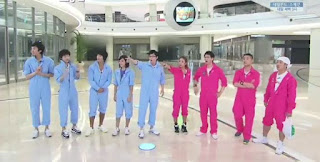 The place to carry out the mission was at Times Square Mall, Running Man members were divided into 2 teams : 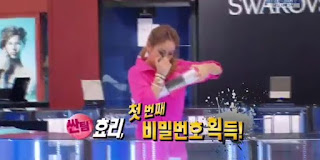 The first mission is to find a secret code hidden in Time Square Mall in one place, they are given instructions that is where the most expensive place is.
Cheap's team managed to find the code by Lee Hyori at the jewelry store. 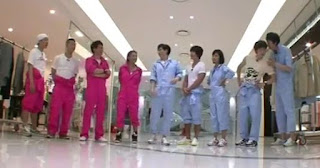 The second mission is to use clothes that are hanging on the shelves simultaneously, the members competing in the first speed finish race are the winners. 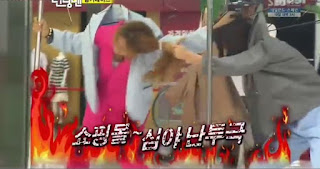 After that the Expensive team is given instructions to guess the place with 4 words, the first to find the secret code is the winner 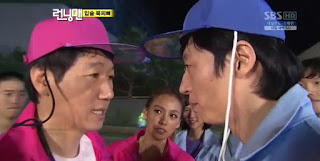 The third mission is cockfighting, each member gives questions to each other by wearing a hat that has been designed to face each other, to risk who is the first to start the cockfighting.

The one who gets the first turn is the Cheap team, they fight 50 people who have been prepared by the Running Man Producer to compete in cockfighting, the last team defeating the volunteers is the winner.

The two teams returned to Times Square Mall to find a secret code that had been hidden somewhere, and the one who found it was the Cheap team. 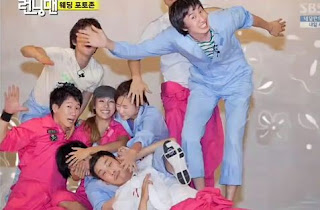 The Fourth Mission is the last mission, the two competing teams must stand on the podium to be photographed, to complete the mission and not get punishment.

The Fourth Mission was the last mission, the two competing teams had to stand on the podium to be photographed, and the members with the most faces in the photos, at the end they had to guess the secret code and the one who guessed was the Expensive team. 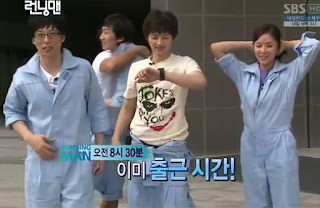 The Expensive team can get out of Times Square Mall on time , while Cheap's team must receive punishment, of the four members only two members are sentenced, and the survivors are Kang Gary, and Lee Hyori, while Ji Suk Jin and Haha must complete their sentence for can go home.
Tag : Running Man