Members and guest stars are not allowed to leave Suwon World Cup Stadium for 24 hours, they will compete to collect piggy banks with money and money can also be obtained through missions, here Ji Suk Jin arrived late which eventually became a member of the Blue team.

The first mission was carried out in the Galery Room, the two teams had to find a piggy banks that Producer Running Man had hidden 4 piggy banks in this first mission, the Blue team managed to find three pig piggy banks while the Red team only found one. 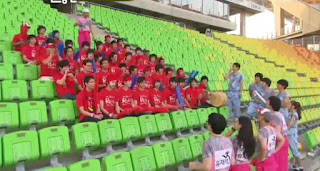 The second mission began, they had to answer the questions posed by their teammates but here something was different, the producer of Running Man brought in 40 cheerleading volunteers, the cheerleading task was to disrupt the mission for the two teams, of course it made both teams upset because this is unexpected.

The Red Team started first, at that time Haha gave questions to the Red team members and because the cheerleaders were too noisy haha ​​became annoyed, but the results were pretty good the Red team managed to answer 3 questions. 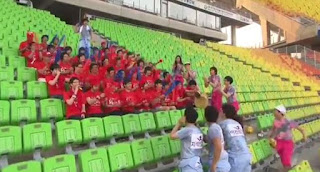 After the rematch it turned out that the results had not changed Blue Team again won this second mission, and they won 500,000 WON. 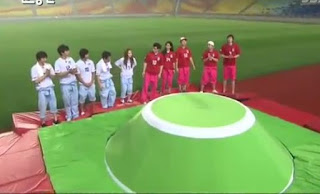 The third mission is a photo on the podium, the most members are photographed so the team is the winner, this game is quite simple as the first episode. 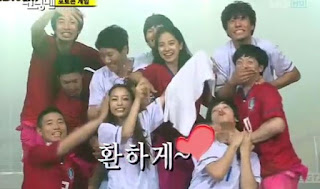 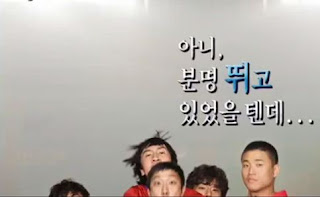 What's interesting in here  Kang Gary when he was photographed there , stay with a calm expression, the Running Man members laughed when he saw him and the winner of this third mission was the Red team, they got 500,000 WON. 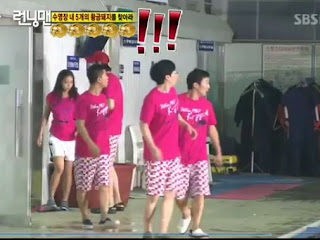 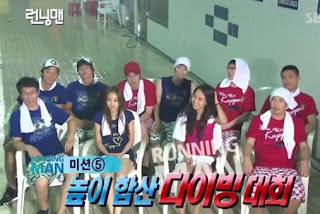 The five misson the members tested their courage by jumping into the water, they could choose a height of 1.5 meters, 3,5 meters, 5 meters, 7.5 meters and 10 meters. Each team member leap will be accumulated, the team that has the highest score will be the winner.