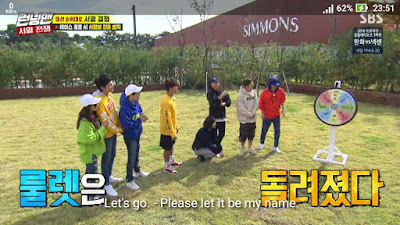 In this episode, members running Man competed individually to compete for the first rank, which was divided into three parts / rounds.

At the opening this time the members focus on Kim Jong Kook wearing yellow clothes because usually the commander wears black clothes. Then as usual the god variety seems to get into Lee Kwang Soo, because at that time like a bee in his clothes is attracted to Kwang Soo, this also causes a stir because two members of the running man who are cowardly Ji Suk Jin and Yoo Jae Sook are scared of bees The one who sticks to Kwang Soo's shirt suddenly flies over Ji Suk Jin ears, Ji Suk Jin and Yoo Jae Suk goes along with the fear of being attacked by a bee. 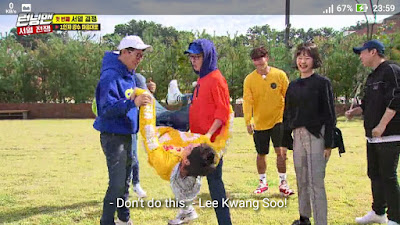 After this opening starts with the members doing roulette, and kwang soo which is usually always unlucky this time gets the first rank. The other members were also trying to praise and flatter Lee Kwang Soo excessively until finally he fell due to the mischief of Ji Suk Jin and Yoo Jae Suk.

Lee Kwang Soo has the right to rank other players, and Kim Jong Kook is always at odds with Kwang Soo getting the last rank. the reason is because Kim Jong Kook's fashion is according to Kwang Soo too ordinary. 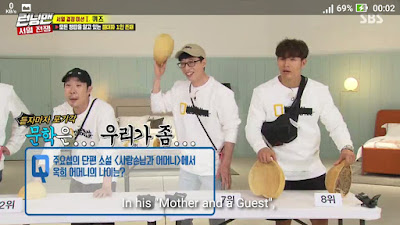 In the second round is a quiz competition, and in this race there are absolute members who know all the answers.

In this race the members must hit his head with something that has been provided by pd running man.

The winner of the second race this time is Yang Se Chan and the absolute member who unexpectedly managed to trick the other members turned out to be Haha. 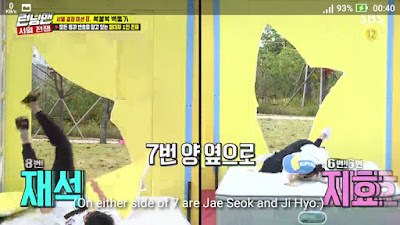 in this third round the running man members had to hit a door made of Styrofoam and had to avoid the trap behind the door in the form of mud water and clean water.

in this third round there is an absolute member who knows where the trap is, and the other members have to guess it by voting the same as in the previous round. 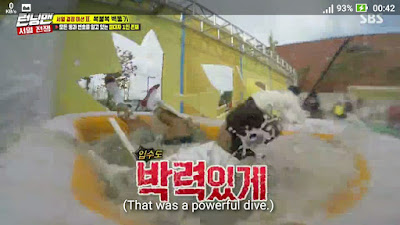 But this time there was a draw in the voting between Yoo Jae Suk and Lee Kwang Soo, but in the end after re-voting finally Yoo Jae Sook was chosen and the members managed to guess the absolute members because it turns out Yoo Jae Suk is the culprit. 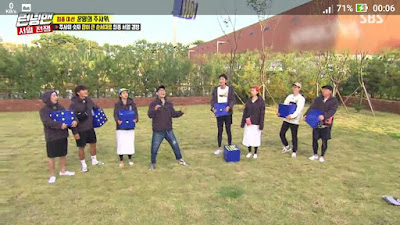 After the third round ends, immediately proceed to the final round where members of running man risk the number of badges they get into dice where the members are free to change the number of dice on each side according to their wishes. 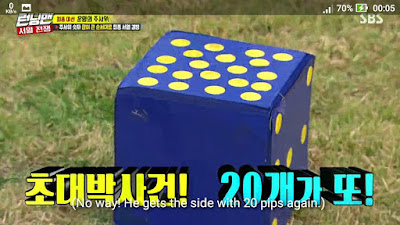 As usual the members who have the bad luck get a small number of dice, but not as usual the commander at this time fared very badly because he got the total zero number.

Ji Suk Jin managed to get the highest score this time and was entitled to be the first champion after so long not getting the first rank, and Kim Jong Kook was ranked last. 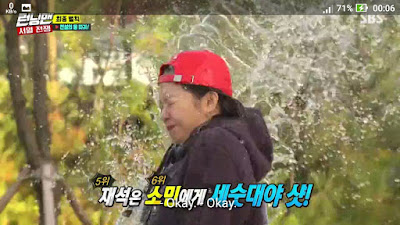 At the end of the race the members who failed to get the first rank received punishment in the form of water flush according to the container that provided the running man producer. 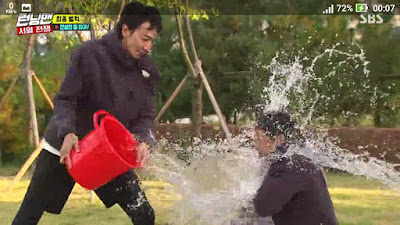 Here is very exciting because the size of the container is bigger each person based on the ranking in the race. 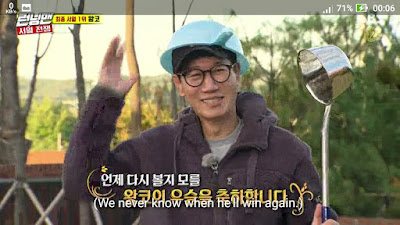 finally Ji Suk Jin has the right to get a trophy in the form of a large spoon and a water basin crown
Tag : Running Man