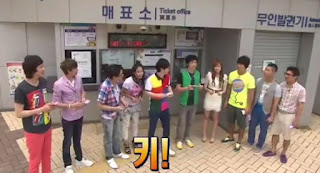 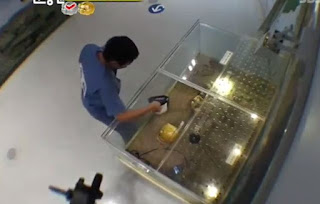 The first mission was to find 2 hidden piggy banks at the Gwacheon Science Museum. The two teams had to complete the mission to get clues where the piggy bank was, the children's team managed to find the piggy banks quickly.

The second mission is that both teams must throw their team members to pass the pole, so that the jumping member cannot hit the pole, if the pole falls then it fails. 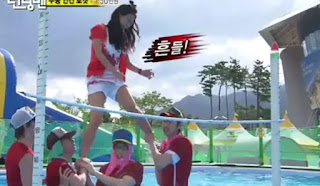 The Red Team first turns to jump past the pole, Song Ji Hyo is chosen to jump, but when he just rises to the shoulder of Ji Suk Jin and is held by Lee Kwang Soo's hand she falls back and they miss the first chance. 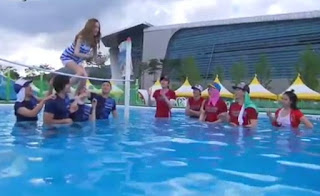 Jessica from the Blue team got ready to jump, she climbed the shoulders of Kim Jong Kook and Song Joong Ki, then jumped into the water without striking the pole, the blue team managed to win the first chance. 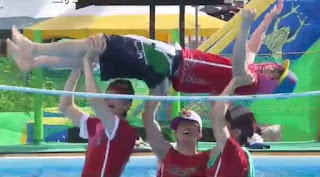 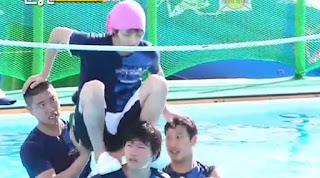 Now it's the turn of the Blue team that jumps is Song Joong Ki, he easily manages to jump past the pole, interestingly here Yoo Jae Suk disturbs Kang Gary who is focusing on running the mission, calmly Yoo Jae Suk joins to listen to the blue team's plan, when Kang Gary sees Yoo Jae Suk was surprised, the Running Man members were laughing. 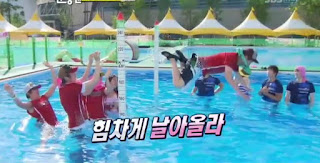 Next, the Red Team's turn to jump is Ji Suk Jin, he immediately rides Lee Kwang Soo's mother but because he can't hold Ji Suk Jin's weight then Lee Kwang Soo sinks, they try again this time Ji Suk Jin climbs the shoulders of Lee Kwang Soo and Yoo Jae Suk , they managed to jump well, but when jumping Ji Suk Jin, the first one hit by water was his face and body so he was in pain after jumping and the Running Man members laughed.

Now the second must pass a high of 2.30 M, the one who made it past is the winner. 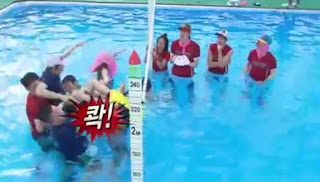 The first blue team chosen to jump is Kim Jong Kook, with interference from Yoo Jae Suk to Kang Gary, finally Kim Jong Kook fell, this time Song Ji Hyo who worked on Kang Gary he was standing right next to Kang Gary who was Focusing on the mission, and the last one that bothered him was Ji Suk Jin, when he was going to interfere with Kang Gary he was hit by elbows by Song Joong Ki who fell and the members of Running Man laughed.

The two teams took turns and still no one succeeded, at the end Lee Kwang Soo was chosen to jump, he easily made it past and the winner for the second mission was the Red team. 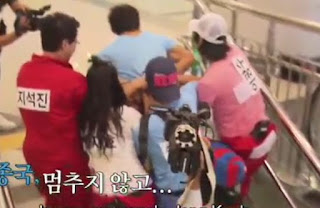 The red team chases after Kim Jong Kook to rip off his name tag, they are overwhelmed because Kim Jong Kook is very strong he managed to survive long enough from the pursuit of the Red team. 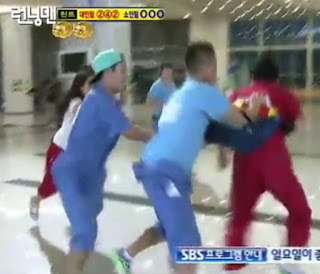 While Yoo Jae Suk he hid in a shrewd manner but Haha from the Blue team managed to find it and finally Kang Gary torn name tag Yoo Jae Suk , after the two teams got a clue they immediately searched where the piggy bank was located. 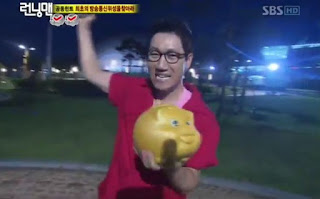 The first to find a piggy bank was Lee Kwang Soo from the red team, and soon they finally found Ji Suk Jin from finding the second piggy bank, so the third mission tranquilizer was the Red team.

The fourth mission begins with the two teams taking turns sitting in the barrel while being pushed to the middle of the circle that has been set, if successful then the team is the winner.

The first one to try was Ji Suk Jin from the red team, he had the bad luck after being pushed he wasn't in a circle but instead turned his back on the camera. 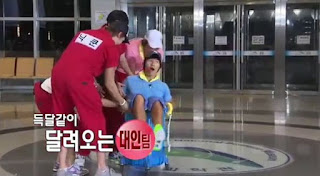 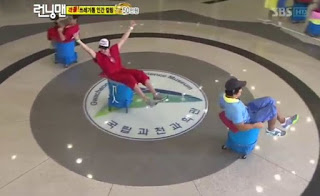 The third is Nichkhun he managed to push Kim Jong Kook out of the circle, and for now he is in the middle of the circle. 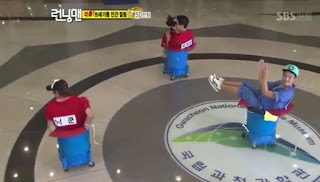 For the fourth one is Haha he managed to push Nichkhun in the middle of the circle so Nichkhun left the circle. 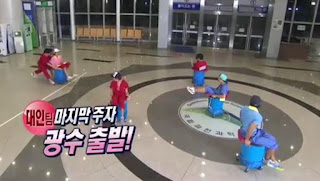 For the fifth is Lee Kwang Soo continued in Episode 5
Tag : Running Man