In this episode of Running Man , the mission continues to collect piggy banks and money earned on each mission or game. 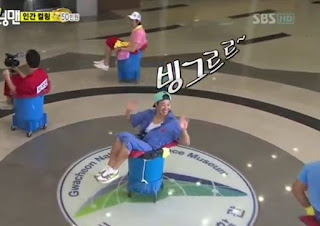 In the fifth mission, it is Lee Kwang Soo's turn to be ready to push Haha who sits on the barrel to get out of the circle to win this round, but bad luck still haunts the Red team, after Lee Kwang Soo is pushed towards the barrel instead of going towards Haha who in the middle of the circle.

For the last round the two teams agreed to push the barrel not to cross the line, if it crossed the line it would be considered a defeat.

Yoo Jae Suk from the Red team was the first for this game, but again bad luck still haunted the Red team, when Ji Suk Jin and Nichkhun pushed Yoo Jae Suk it turned out that his push power was too strong so Yoo Jae Suk crossed the line and he failed.

The second was Haha from the Blue team, he was pushed by Song Joong Ki while in the middle he lost his balance so the barrel dropped, and he was disqualified. 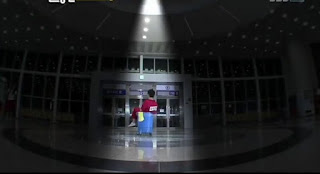 The third is Ji Suk Jin from the Red team, he is pushed by Lee Kwang Soo not with enough strength because only half the way has stopped the barrel, and the worse is he faces his back to the camera like the first round :D. 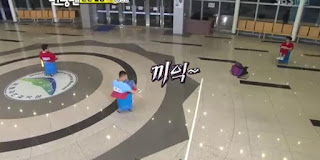 The fourth is Kang Gary from the Blue team, he managed to approach the line well, after being pushed by Song Joong Ki, for a while the blue team excelled.

The fifth is Lee Kwang Soo from the Red team, he managed to push Kang Gary so well that he crossed the line, and finally Kang Gary came out. 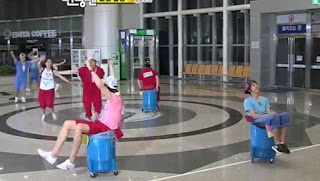 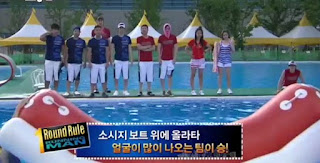 The sixth mission began, this time they played the existing photo zone game as in the previous episode, here Kang Gary still ranked first in terms of photos because every time he was photographed he was always on the camera frame.

In the first round they boarded a banana balloon to do a photo, the team that had the most photos was the winner, and of course here Kang Gary was in the photo while stylishly making a v sign, and this round was a series because Nichkhun was also in the photo. 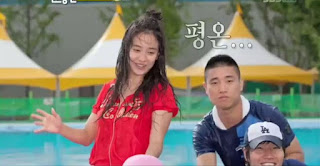 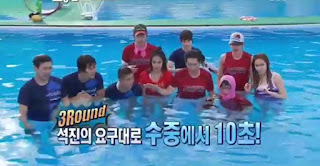 The third round was the idea of ​​Ji Suk Jin who proposed to dive for 10 seconds and be photographed in the water, the first attempt failed because the cameramen could not take pictures clearly, and the second chance here was that Nichkun was photographed in water. 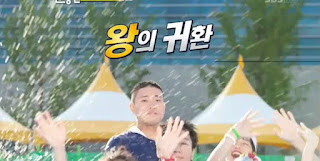 For the fourth round this time the two teams had to jump in order to be photographed, this time Kang Gary managed to be in the photo, with a calm face making the Running Man members laugh, and the winner of the sixth mission was the Blue team. 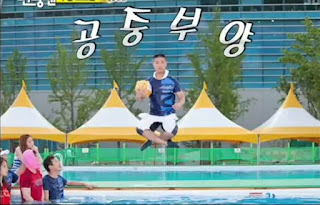 To celebrate the victory of the blue team Kang Gary jumped in a peaceful and calm expression while sitting while jumping by holding a piggy bank.

For the seventh mission the two teams had to find a piggy bank that was hidden by the producer in one of the rooms in the museum, with instructions for the A380 code. 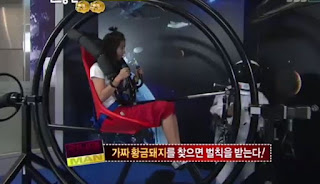 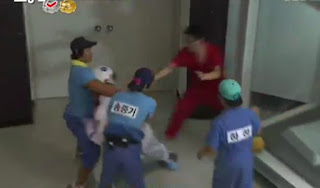 The one who discovered the first piggy bank was Kim Jong Kook, he managed to find it on the A380 in the trunk of the plane, and who found the second piggy bank was Ji Suk Jin, he found it in a disguised astronaut statue carrying a piggy bank in his hand hidden inside a helmet, but when Ji Suk Jin would take the piggy bank, the astronaut escaped and was caught by the Blue team and the one who managed to get it was Kim Jong Kook, the winner of the seventh mission was the Blue team.

For the eighth mission both teams chose each member to enter a bus full of passengers and then pressed the bell signal down, then after that they could get out of the bus, the first person who came out was the winner. 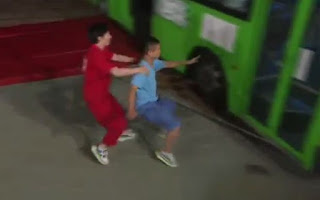 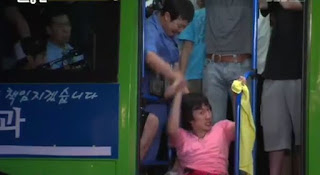 In the third round both teams boarded the bus simultaneously, and if one team member was still on the bus then the team was the loser, here the fight was so fierce between the two teams, and the winner was the Blue team. 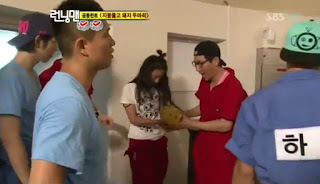 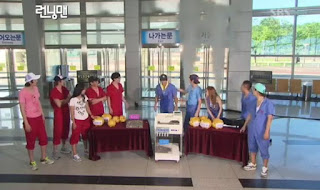 This time the victory belongs to the Blue team, because the amount of money more than the Red team, the blue team managed to collect 2,229,000 WON while the Red team only 1,534,000 WON. 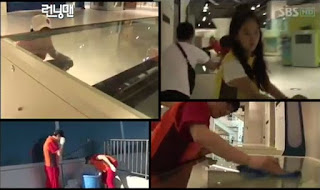 The blue team can go home on time and the Red team must receive a penalty in order to be able to go home, the punishment this time is to clean the Gwacheon National Science Museum.
Tag : Running Man