In this episode, running man uses a new method for the final game using Running Ball, Running Ball will be used at the end of the event to determine who won and who received the penalty by drawing.

The winning team can return home on time while the losing team must receive a penalty, this time Running Man invites Kim Shin Young, Se7en, Son Dambi as guest stars. 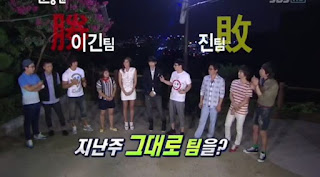 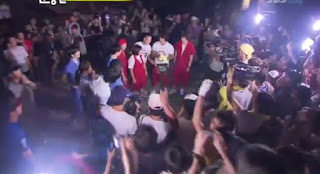 At the opening of the second event the team had to look for a running man agent hiding in the Seoul Tower area, the red team used the bus to go to Seoul Tower and the Blue team just walked up the stairs to Seoul Tower, Seoul tower at night was a suitable place to gather , it's true when the Running Man members arrived they were immediately surrounded by spectators, after not long looking for those who found the Running Man agent was the Red team, and the first Running Ball was obtained by the Red team.

The first mission began, this time the two teams had to wear buckets taped to their feet, and put the other buckets in, and take the Seoul Tower miniature, the first to enter the finish line was the winner.

In the first round, Haha with Lee Kwang Soo, Haha was having a hard time taking the Seoul Tower miniature, while Lee Kwang Soo lost his balance he fell many times because the bucket put on his leg didn't stick properly, the first round winner was Haha from red team. 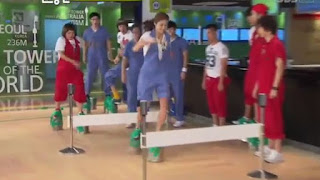 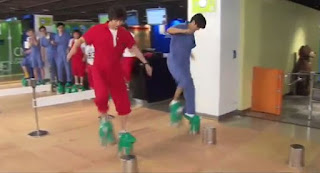 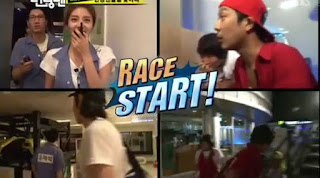 On this mission the two teams attacked each other members who were considered potentially to have a clue in their name tag, with the chaos that happened Running Ball was found on the top floor of the Seoul Tower by Song Joong Ki, and the second mission winner was the red team. 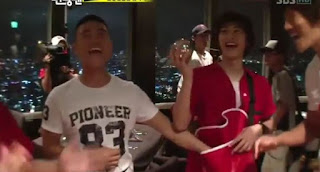 The third mission began, this time the two teams had to drink coffee, but what's interesting was that they used a spoon that had been given a number and hidden behind the cloth, the size of the spoon was different in each number from the smallest to the biggest. 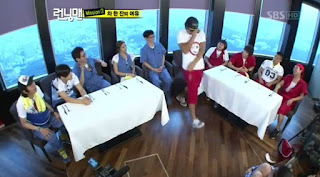 After that to fill in the free time because soon enough in the morning, Yoo Jae Suk asks Kim Shin Young, Kim Joong Kook, Se7en to dance one by one. 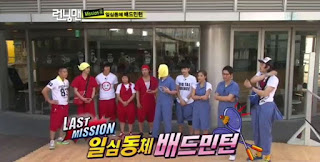 And the last mission begins, the last mission is to play badminton by tying the hands of team members together and in one match must get 5 points, the match is only 2 rounds and if  the team win the last round that's the winner, the two teams compete to win the final mission because of determining who among those who will go home quickly and who will be punished. 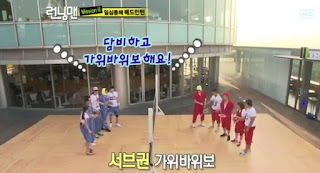 The point was obtained by the Red team thanks to Haha's service, because the ball soared the blue team couldn't hit it well, and not long the score drew to 4: 4 the end of the match was getting closer, and the winner of the first match was the red team net and enter the blue team area. 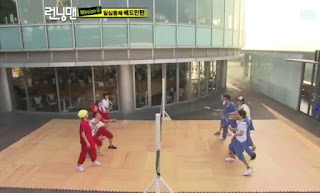 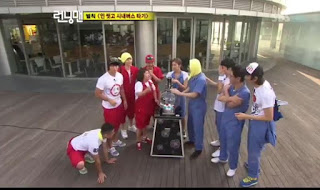 Finally arrived to use the Running Ball that the two teams had collected, Running Ball entered into the lottery place, the possibility of winning the Blue team more because they managed to collect 3 Running Balls while the Red team only had 2 Running Balls, 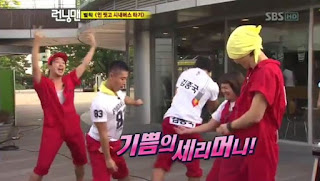 But unexpectedly coming out of the lottery red ball which indicates that the red team is the winner.

The blue team received the penalty of scribbling faces and going home using a bus, on the bus many passengers laughed because they saw a very funny appearance.