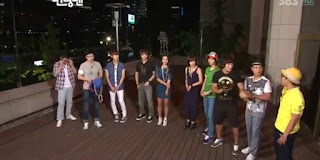 This episode of Running Man members is at Sejong Center for the Performing Arts, a place that has a many history in the field of music & theater and also still uses Running Ball to draw who is the winner.

Before starting the first mission, the two teams did the competition which was the most popular in the eyes of the population by wearing a couple hat while staring for 10 seconds, who did it Haha and Ji Suk Jin here they both seduced the residents to choose them, the winner was Ji Suk Jin and Blue team gets Running Ball. 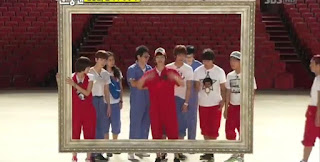 The first mission began, the mission this time is Photo Zone but using a large photo frame, for the rules the most photographed team is the winner. 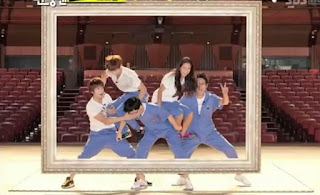 In the first round each team must form a human speech within 10 seconds, the first one to try is the Blue team, but in a short time they fail because when they are photographed they look like a shaky pyramid. 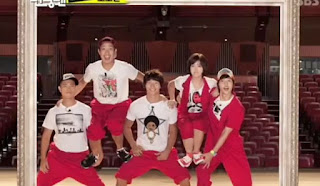 Now it's the turn of the Red team, they casually pressed the camera button and returned quickly and formed a solid human pyramid and the winner of the first round was the red team. 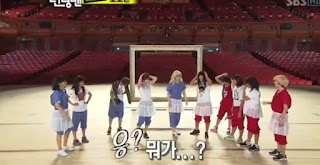 In the second round each team had to pose like a ballerina by standing with their toes and placing their hands on their heads and the most photographed team was the winner, this time the producers had prepared special clothes to be photographed with a ballerina theme. 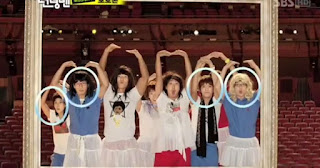 After the members changed their costumes, they were ready to be photographed, but the difference this time was that the big frame moved up, down, left and right so that the two teams were difficult to photograph, but after the chaos the winner of this round was a blue team with 4 people photographed. 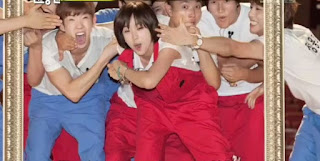 The third mission began, this time they played hide-and-seek for an hour around the Sejong Center for the Performing Arts area by hiding teams having to find 5 Haeci dolls (lion-shaped dolls chosen as Seoul city symbols) the hiding team was the Blue team , and for the pursuing team the Red Team must tear the Blue Tag's name tag, Kim Jong Kook scares the Blue team with the sound of his bells making the blue team members scared. 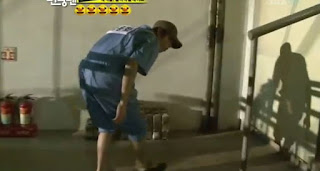 The hide-and-seek show began, Haechi was first discovered by Jung Yonghwa who was on the roof near the back stage performance quickly but at that time Yoo Jae Suk was out, because alone on the 3rd floor finally Kim Jong Kook tore up his name tag when he fled into elevator, and not long after Ji Suk Jin out because Haha and Kang Gary managed to tear Ji Suk Jin's name tag.

After that the Blue team searched carefully, the second Haechi was found by Jung Yonghwa in the library, and also shortly afterwards Song Ji Hyo managed to find the third haechi.

After the three remaining members of the blue team gathered to determine the unexplored location, and divided the members, Song Ji Hyo and Jo Kwon went to the Shin Gi Jeon area while Jung Yonghwa went to the Pit Orchestra area, they only found two Haechi to win the mission this third. 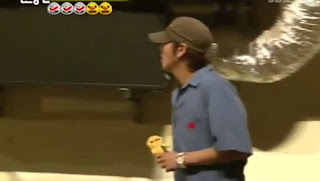 Ten minutes left to find Haechi, Jung Yonghwa managed to find Haechi fourth in the Pit Orchestra area, then Song Ji Hyo and Jo Kwon were still searching in the area of ​​Shin Gi Jeon, at that time Kim Jong Jook found Jung Yong Hwa and chased him to tear his name tag . 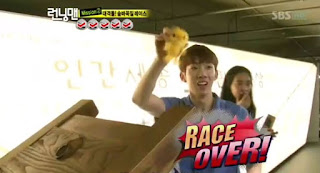 But not long after that Jo Kwon managed to find the last Haechi in Shin Gi Jeon, the winner of this mission was the Blue team. 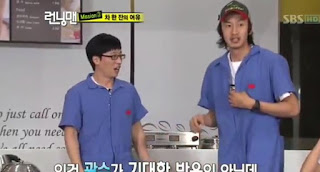 When the members going to start third mission , Lee Kwang Soo arrived at 4:00 am, he arrived late because he had to finish shooting the drama first, but his arrival was not welcomed by the members. 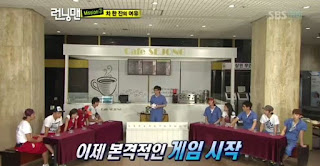 The third mission begins, this time the mission is to drink lemon tea, the two teams take turns to roll the dice and the numbers in dice 1 - 12 to determine the number of lemons to drink, the team that drinks the fastest lemon tea is the winner. 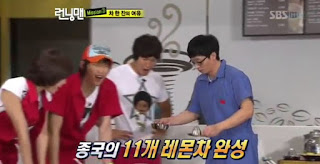 The first turn is the Red team, Kim Jong Kook gets 11, meaning he must drink 11 lemon juice, because it's too sour then half a lemon is counted as 1 lemon, the next turn is Song Joong Ki he must drink 10 lemons not much different from Kim Jong Kook , Eun Jeong gets 2 lemons, Haha gets 8 lemons and Kang Gary gets 5 lemons. 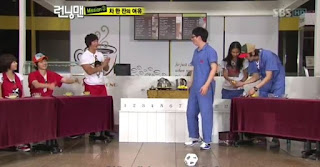 Now it's the turn of the first Blue team that Yoo Jae Suk got 11 as well as Kim Jong Kook, after that Ji Suk Jin got 3 lemons and Lee Kwang Soo got 11 lemons, Song Ji Hyo 8 lemon, Jo Kwon 8 lemon and Jung Yonghwa 8 lemons.

And now it's time to choose a spoon to add sugar to lemon water, as usual spoons are given numbers from 1 - 12 which are all different sizes. 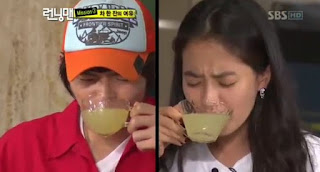 After the two teams had selected a spoon and got sugar according to the size of a spoon, after that they had to choose a number again to get dessert, and finally the time came to drink lemon tea, with a very close time difference the third mission winner was the red team. 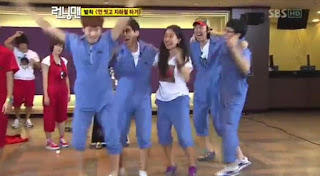 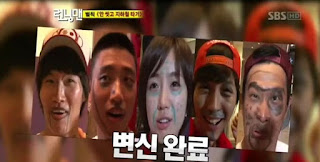 And the red team must also receive punishment by riding a train with a scribbled face.
Tag : Running Man