This episode of Running Man is at Lotte World, Lotte World is a major recreation complex in Seoul, South Korea. It is the world's largest indoor theme park, an outdoor amusement park called "Magic Island" Opened on July 12, 1989 . 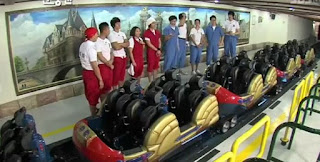 The first mission began, both teams had to ride a roller coaster while singing, the one who got the highest score was the winner, every turn only 2 members were chosen to ride the roller coaster . 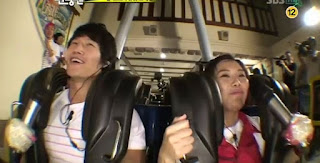 Next is the second turn, the blue team, Yoo Jae Suk and Song Ji Hyo were selected to ride the roller coaster, they couldn't sing well because they were tying up on a roller coaster, and finally they got a score of 74 . 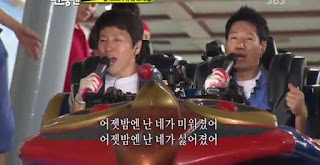 The third is Ji Suk Jin and Kim Soo Ro from the Blue team, they are passionate about riding a roller coaster, but when singing the lyrics are different from beginning to end, and they get a score of 77 just like the red team . 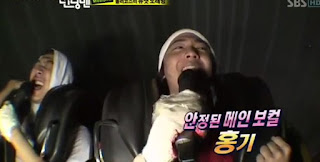 The fourth is Haha and Lee Hong Ki, although Haha is afraid ride roller coaster , Lee Hong Ki managed to sing well with stable vocals while riding a roller coaster, and they get a score of 78 . 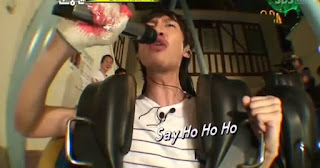 The last one is Lee Kwang Soo, he is very confident when singing, but what the members hear is that the sound is not good, and the tones didn't match the song , so he only gets a score of 52, and the winner is the first mission is the Red team they get Running Ball . 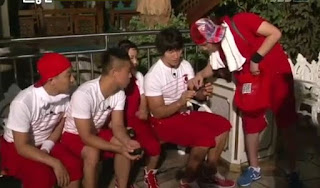 The second mission began, this time the mission was to find 3 tickets in three locations in 1 hour, the Red team which became the search team while the Blue team was the Chase team, the chasing team used small bells in the right as sportsmanship . 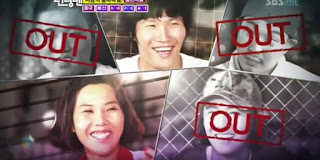 Only 20 minutes left to find the last ticket, now only Haha, Kim Jong Kook, and Shin Bong Sun are left, they continue searching at the last location while hiding, at that time Yoo Jae Suk managed to find Haha who was hiding in the shop, and finally Yoo Jae Suk managed to catch Haha and tear his name tag despite being exhausted when chasing him. 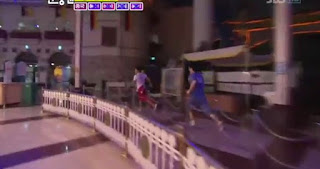 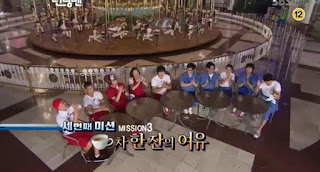 The third mission began, as usual to relieve sleepiness. The mission is to drink herbal teas with different spoons in each number, but this time is  difference they play a game of reversing coins on a book with the palm, if the team loses the game they have to add egg yolks, the dice that determine how much yolk they will get. 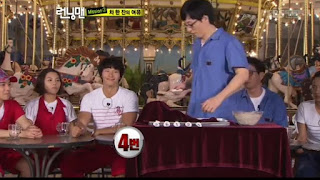 The Red team began to choose the spoon number, the first was Kim Jong Kook, he chose number 4 and got a flat vegetable spoon to take herbal tea, the second was Shin Bong Sun she chose number 3 and got a tablespoon. 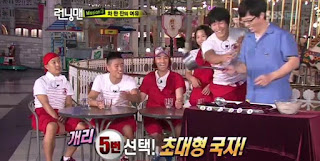 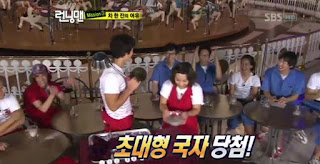 Then the game reverses the coin on the book using the palm of the hand, the loser must roll the dice to get the extra egg yolk according to the number of dice obtained. 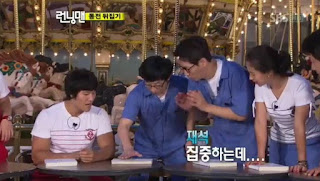 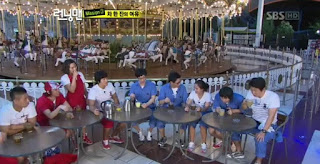 After that they drink herbal tea mixed with egg yolks that are still hot, the team with less time is the winner, and the winner of the third mission is the Red team with 4 minutes, while the Blue team 4 minutes 15 seconds, the red team gets Running Ball. 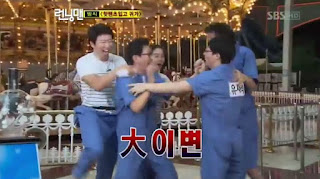 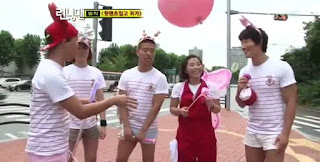 And the red team must receive the penalty of returning home using Hot Pants, the balloon and the face that are scribbled.
Tag : Running Man