This episode of Running Man is at the National Museum of Contemporary Art, Song Joong Ki, who hasn't been filming for 2 weeks, is back again now , and invited guests are Cha Tae Hyun, and Yoon Se Ah.

At the opening Yoo Jae Suk read a short message sent by the members to the producer Running Man about this program, after which the Running Man members did the first mission, which was different this time the mission was carried out individually, for the team division to be carried out on the mission second.

The first mission begins, the mission is an auction of mysterious items that will be useful to be used in this episode, Yoo Jae Suk who becomes the auctioneer while the other members become bidders, to get the auction items they must accept punishment as a substitute for money, who bid the most high will receive a penalty before getting the auction item.

The first item will be notified if the highest bidder has been determined, the penalty to be received is to use the chopstick on the forehead, the members bid one by one, for men they may not vote, if the vote is issued the offer is canceled.

The first offer starts from Kang Gary 15 times, Lee Kwang Soo 16 times, Song Joong Ki 20 ​​times, and the highest bidder is Ji Suk Jin with 28 times then he receives the punishment, the item being auctioned turns out the coupon uses the power of Kim Jong Kook, when Ji Suk Jin was stopped for one time, he made a sound, the offer was canceled, the second winner was won by Ji suk Jin with 6 times, when he was called again he issued a vote and the offer was canceled, the members of Running Man laughed.

The third offer starts this time starting from Haha 1 time, Kang Gary 2 times, then Lee Kwang Soo 4 times and Kang Gary bid again 7 times, the highest is Kang Gary so he receives the punishment, he is able to hold 7 times then he managed to get The coupon uses the power of Kim Jong Kook.

The second item is Running Ball, the Running Man members are determined to get Running Ball, the first offer was started from Kang Gary 3 times, Song Joong Ki 4 times, Lee Kwang Soo 6 times, and the highest offer by Yoon Se Ah 8 times then he received the sentence, and she managed to win Running Ball after Song Joong Ki's black knight was willing to sacrifice to be stolen.

The third item is a penalty-free coupon, this is the item that the Running Man members are waiting for, the first offer was started from Kim Jong Kook 5 times, Lee Kwang Soo 8 times, Song Ji Hyo 10 times, and Yoo Jae Suk 13 times, he as the auctioneer wanted the coupon to be free of punishment as well, then the highest bid was Cha Tae Hyun 21 times, then he had to accept the punishment, but only 6 times he was issued a vote, then the offer was canceled. 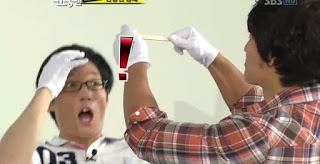 The second offer starts from Lee Kwang Soo 11 times, Song Ji Hyo 12 times, fierce offers between Song ji Hyo and Lee Kwang Soo for wanting to be free from punishment, but Yoo Jae Suk who made the highest bid is 22 times, then he must receive the punishment , just one hit by chopsticks he gave up, the Running Man members laughed. 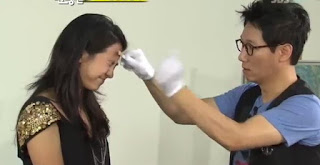 The third offer starts from Haha 1 time, Ji Suk Jin 2 times, and so on until Song Ji Hyo bid 7 times, then he must receive a punishment, and finally Kang Gary willing to get punishment  for Song Ji Hyo to get a free penalty. 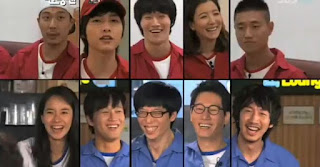 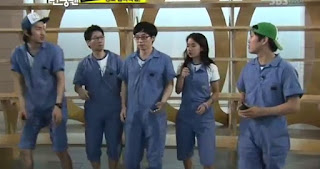 The second mission began, the second mission rules should not run quickly in the Museum area, and the producer had prepared boxes to hide for the search team, this time the Blue team became a search team while the Red team became the chasing team, the search team was given 1 hour to found 3 paintings that had been notified by the producer, while the Red team had to tear the name tags of the Blue team members.

The blue team decided to split up, Yoo Jae Suk with Song Ji Hyo, Lee Kwang Soo with Ji Suk Jin and Cha Tae Hyun went alone, not long after the mission began Cha Tae Hyun could actually get the right painting, but because he didn't know he just missed it . 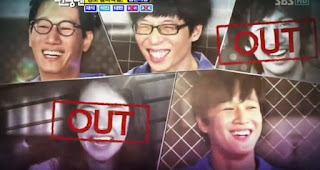 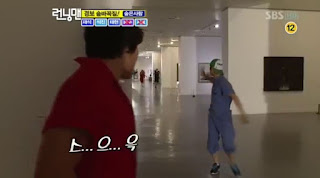 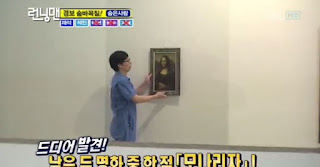 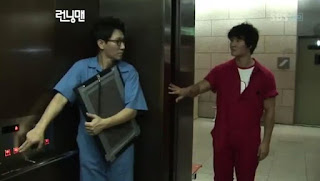 And now only Ji Suk Jin's search team is left, he tries to run away using an elevator but unfortunately Kim Jong Kook found it, and finally Ji Suk Jin is caught, then the second mission winner is the Red team, they get Running Ball. 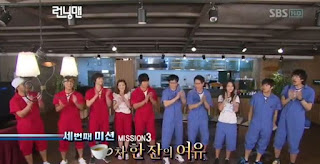 The third mission began, as usual to get rid of sleepiness the two teams had to drink coffee, but before that both teams had to draw one of the paintings in the museum, 1 member who did not go to the gallery had to remember the picture of the painting and photograph the original painting, which the fastest is the winner. 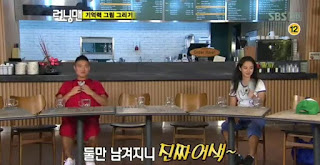 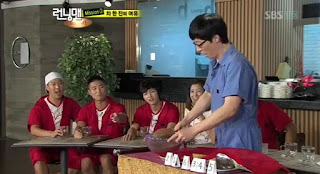 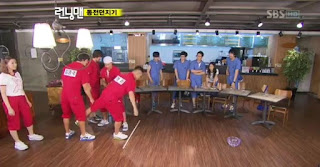 The second round was started this time the mission was to throw a coin into the bowl, if one member failed then he had to repeat again, the first one to try was the red team, Kim Jong Kook managed to insert a coin, the second was Kang Gary he used the Kim Jong Kook power coupon to throw a coin, and the result fails. 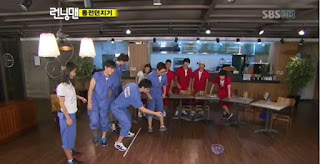 Now it's the turn of the blue team, the first is Song Ji Hyo managed to enter a coin, the second is Yoo Jae Suk he also succeeded, the third was Lee Kwang Soo he failed to throw coins, the two teams took turns and the winner of the second round was the Red team. 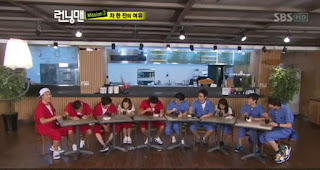 After the two teams finished making coffee, it was finally time to drink coffee that was still hot, the fastest team was the winner, and the winner of the third mission was the blue team to get Running Ball. 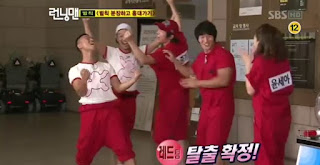 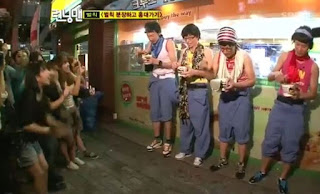 The Blue Team had to accept the punishment and came to the noodle shop and ate the noodles while standing in front of the shop, and after that they could go home.
Tag : Running Man