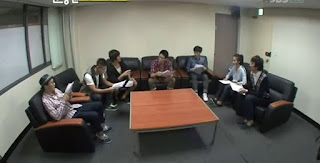 In this episode of Running Man is at Seoul Olympic Stadium, because Seoul Design Fair has been held there, this time there were no guest stars invited, Song Joong Ki returned to Running Man after the previous episode did not come due to filming the starring drama, and also because Song Joong Ki's birthday the producer agreed to trick Song Joong Ki as did Gary for the 1:7 fight.

Song Joong Ki, who was interviewed, did not know that the members would trick him and the quiz competition began, the members had to answer the questions that would be given by the producer, only needed to answer one time to get Running Ball.

The first one to answer correctly is Yoo Jae Suk, according to the plan he became a host to ask questions to other members, the Running Man members pretended not to know the answer to his question to trick Song Joong Ki into not being suspicious, the second answer the correct question was Kim Jong Kook, the third is Gary he answered the question about the name of the character of the ninja turtle, Donatello, Yoo Jae Suk pretended to be surprised when Gary found out the answer so he asked who was Donatello, Gary answered that it was all my family, and all members Running man laughed. 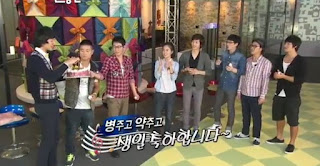 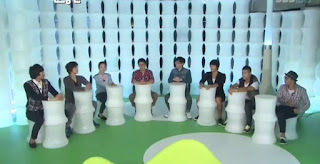 The second mission is to change the card just like the previous episode, who gets the thief card will not get a Running Ball, and members who qualify in each round can give the card they have to the other members. 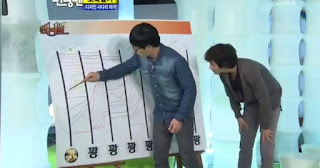 The first game this time was the name stairs line , the first round started, the members made their stairs lane and the one who got Running Ball was the winner, the first Yoo Jae Suk failed to get the Running Ball, Lee Kwang Soo unexpectedly won the first round, and In the second round won by Ji Suk Jin they can give the card to the other members, Lee Kwang Soo and Ji Suk Jin give the card to Kim Jong Kook, after that the members exchange the card again with the person next to him. 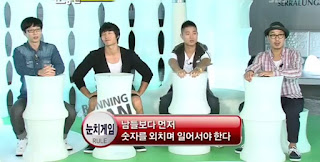 The second game is that the members have to stand up and shout numbers 1 - 6 and if they shout the same number then they will be eliminated, the game that is quite simple but drains the mentality of the members, who will survive will get Running Ball and give the card to other members .

Recently the game started by Song Ji Hyo, Gary, and Haha was eliminated because they shouted number 1 simultaneously, and the next one that was eliminated was Yoo Jae Suk and in Song Joong Ki's final against Kim Jong Kook who won the second game was Kim Jong Kook and his card given to Haha.

After that the member who wins in the previous game can change the seats of the remaining members, after that they open their respective cards and those who have the thief card are Yoo Jae Suk, from the start the cards are in his hands, all members get a Running Ball except Yoo Jae Suk. 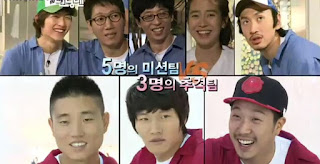 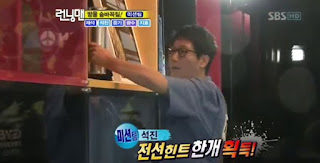 The blue team split to find clues, Yoo Jae Suk and Ji Suk Jin searched the Pavilion Design City area, just as the game started Ji Suk Jin had found the first clue, and at that time they escaped from the pursuit of the Red team who happened to find the Blue team, after succeeding run away Yoo Jae Suk searches in the area of ​​the Cultural Pavilion Design and finds a second clue. 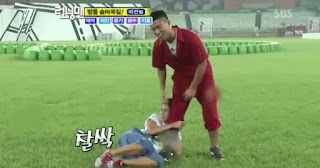 Not long after Kim Jong Kook caught Song Ji Hyo, and asked Gary to tear her name tag but at that time Gary did not have the heart and finally release Song Ji Hyo after hugging Gary's leg, Gary asked Song Ji Hyo not to tell Kim Jong Kook that he release it, and if the Blue team wins Song Ji Hyo must give his telephone number to Gary, in the pouring rain Song Ji Hyo runs away leaving Gary. 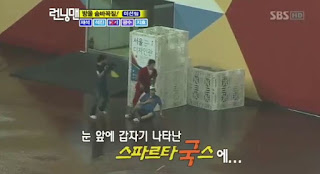 Song Joong Ki ran from Haha and Kim Jong Kook, but because he was exhausted he was caught by Haha and finally eliminated, remaining 30 minutes left Lee Kwang Soo searched the Seoul Pavilion Design area and not long after searching he met Gary and he tried to escape but Bad luck haunting Lee Kwang Soo when he gets into the room he slips and meets Kim Jong Kook, he is finally eliminated.

After that Yoo Jae Suk was discovered by Kim Jong Kook and he tried to run away but was trapped by Gary and Kim Jong Kook, after running Yoo Jae Suk finally ran out of energy and at that time Haha ran from behind and managed to tear Yoo Jae Suk's name tag. 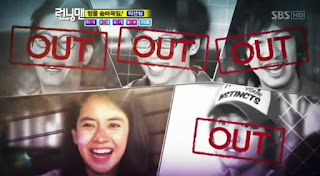 The remaining two members are Song Ji Hyo and Ji Suk Jin, they are still looking for clues to defusing the bomb, Ji Suk Jin is hiding in the Seoul Pavilion Design area, he managed to find a third clue, but he was caught by the Red team and eliminated, now only Song left Ji Hyo. 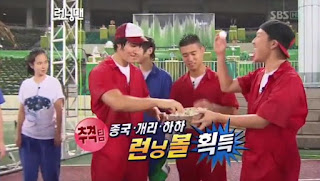 After getting all three of Song Ji Hyo's instructions to find the location of the bomb to defuse it, there was about 10 minutes left before the game ended, but he did not know the name of the first clue so he cut the cable incorrectly, and the third mission winner was the Red team. 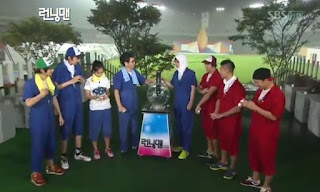 Time to use the Running Ball they have collected, Kim Jong Kook, Gary, and Haha collected 3 balls, Song Ji Hyo and Lee Kwang Soo collected 2 balls, while Yoo Jae Suk and Song Joong Ki had only one ball, this time the punishment was to wear Hot Pants and while walking around the SBS TV station building. 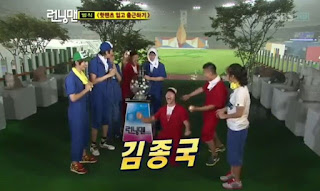 The first one to qualify is Haha, the second ball is Haha, then Haha can give the next opportunity to the other members, the third is Gary , the fourth one is Song Ji Hyo and after giving a chance once again from Haha , the last ball out from lottery is Kim Jong Kook . 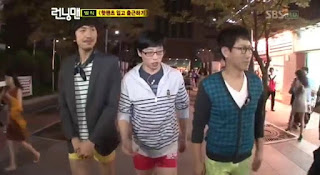 the next week the unlucky members of Yoo Jae Suk, Ji Suk Jin, Lee Kwang Soo, they must accept the punishment using Hot Pants and buy Coffee Ice Americano, the residents laughed and were enthusiastic when they saw them walking in the SBS TV station area, after arriving at the station building SBS TV they immediately filming opening Running Man.