In this episode of Running Man at SBS Broadcasting Center , Yoo Jae Suk, Lee Kwang Soo, and Ji Suk Jin came to use Hot Pants because they received punishment from the previous episode, the member who didn't get a  punishment laugh when he saw them coming using Hot Pants.

The guest stars invited by Running Man this time were Jang Dong Min and Lizzy (After School), before the first mission began, the punishment this time had been determined by producer Running Man was appears in live shows the SBS Morning Wide , still the same as the previous episode using Running Ball for choose the winner , the name that comes out at the lottery will be free of punishment.

The first mission is held in the news broadcasting place, the mission is to exchange cards, like the previous episode that gets the thief card at the end will not get Running Ball, the first card is randomly distributed by Yoo Jae Suk and the first thief card is himself still attached like last week, but because Lizzy showed the card they finally repeated again and now the one who got the thief card is Kim Jong Kook.

And the first game starts, the game this time is continued a word , the member who passes the game will get a Running Ball and can give the card to the remaining members, Song Ji Hyo who was first knocked out, then Jang Dong Min's second, the third eliminated is Ji Suk Jin, after that the fourth Kim Jong Kook was eliminated.

Remaining Yoo Jae Suk, Haha, Gary, Lee Kwang Soo, Lizzy, they continued the game and not long the game began Gary was eliminated, when it was Lee Kwang Soo's turn he pretended to cough to avoid difficult words so he got the next opportunity, but he remained knocked out after trying use the same trick twice. 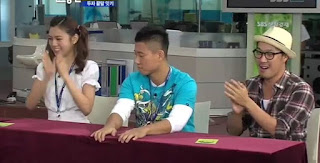 Now only Yoo Jae Suk, Haha, and Lizzy are left, after that Yoo Jae Suk is eliminated, in the final Lizzy against Haha, who won the first game is Lizzy, she gets Running Ball and gives the cards to Yoo Jae Suk , unfortunately the thief card was on Lizzy , so now Yoo Jae Suk held the thief card 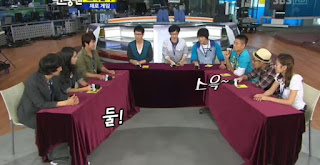 The second game is to shout from numbers 0 - 7 and if the numbers they mention are the same as the microphone that was picked up , then they can get Running Ball and can give the card to the other members, the winner of the second game is Song Ji Hyo and Jang Dong Min. 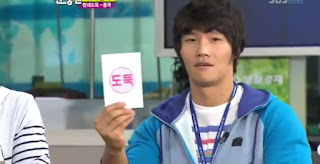 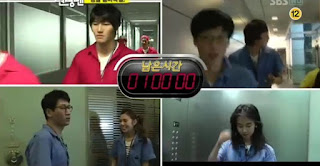 The second mission began, the game this time was hide and seek, the mission was to find 4 tapes hidden in the SBS TV station area within 1 hour and bring it to the control room on the 7th floor, the Red team that was the chasing team was Kim Jong Kook, Gary, Haha and Jang Dong Min, and the Blue team who are the search team are Yoo Jae Suk, Ji Suk Jin, Lee Kwang Soo, Song Ji Hyo, and Lizzy.

Blue Team decided to split up to make it easier to find tapes, Yoo Jae Suk and Lee Kwang Soo were in the SBS History Museum area, they still continued to search for the tapes and finally Lee Kwang Soo managed to find the first cassette. 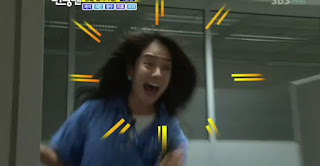 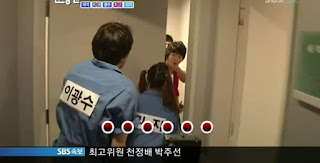 30 minutes left to find the remaining 2 tapes, Yoo Jae Suk, Lee Kwang Soo, and Lizzy searched the 16th floor, but at that time they saw the Red team, quickly all three Blue team members ran using the elevator, after which they went to on the 6th floor because the third tapes was there, but when they were searching, the red team found them finally Lee Kwang Soo and Lizzy were eliminated by Kim Jong Kook and Haha, Yoo Jae Suk went to the 6th floor using the elevator he watched Lee Kwang Soo get caught by Kim Jong Kook, without further ado he immediately closed the elevator door and went to another floor.

The remaining Blue Team is only Yoo Jae Suk, there are 20 minutes left to find the tapes and he finds the third tapes on the 6th floor, and the red team continues to chase Yoo Jae Suk, when the Red team catches him , he escapes thanks to the help of his VJ hold the door so Yoo Jae Suk runs off using the elevator.

And finally after desperately running away he managed to find the fourth tapes and took it to the control room and the second mission winner was the Blue team. 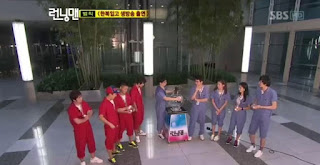 Now it's time to use the Running Ball they collected, Yoo Jae Suk, Ji Suk Jin, Lee Kwang Soo, Song Ji Hyo, and Lizzy each of them has 2 balls, and Gary, Haha, Jang Dong Min each have only 1 ball , and this time Kim Jong Kook doesn't have any Running Ball, he will automatically receive a punishment. 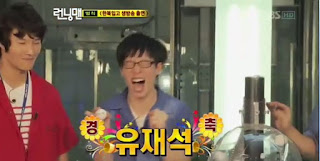 The first one to escape is Lee Kwang Soo, the second is Gary, the third is Song Ji Hyo, and the fourth is Yoo Jae Suk, he is happy after being punished many times this time he is free from punishment, and the last is Ji Suk Jin. 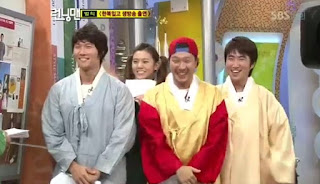 And the members who have to receive punishments are Kim Jong Kook, Haha, Jang Dong Min, and Lizzy, they are getting ready to appear on the SBS Morning Wide live shows , that's the end of this episode waiting for the next episode.
Tag : Running Man