This episode of Running Man is at the Boramae Safety Experience Center, a very important place for knowledge about natural disasters what to do when that happens, for this guest star is Lizzy (After School), and this time Song Joong Ki came back to Running Man after he promised he would come back every two weeks because of the busy drama shooting schedule. 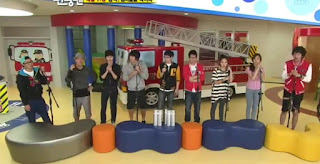 The first mission was relay singing, the Running Man members didn't know that Kim Jong Kook was carrying out a secret mission, at that time they chose the song to be sung and practiced to win this first mission, after the members were given 10 times the chance to sing.

At the end of the sixth chance the producers suggested shortening the lyrics and changing their position, and after that they failed again because of Kim Jong Kook's mistake, in the seventh chance they exchanged positions and they made a mistake again because Yoo Jae Suk , and when it's just started played the song he had made a mistake.

Before using the last chance, Running Man members training after there is no wrong part. In the last chance Kim Jom Jook made a mistake when he said the last word and finally he won Running Ball, the other members looked confused because only Kim Jong Kook got Running Ball, and after that the producer tell the other members because Kim Jong Kook was have a secret mission to mess up the first mission, so this time the members of Running Man were tricked by Kim Jong Kook.

Now the time at 01.00 am, the second mission begins, this time is the game of exchanging cards, who get a thief card at the end will not get a Running Ball, and if one member win the game he can get the Running Ball , and the winner in each game can give the card to other members.

First of all Ji Suk Jin distributes cards randomly, and the first to get a thief card is Haha. 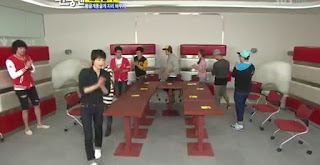 before the second game began the producer suggested playing musical chairs, the members had to sing while walking around the table to select the cards on the table with the seats provided, the Running Man members did not know the thief's cards were except Haha, and those who got the thief card is Song Ji Hyo because she occupies Haha's seat.

The second game started, this game is called one person comes , Lee Kwang Soo who is the MC this time determines the number of people who have to stand up, if the member does not stand in turn it will be eliminated, the first member eliminated is Kim Jong Kook, because of doubts for stand or squat down , the second eliminated is Song Ji Hyo, the third eliminated is Ji Suk Jin.

After that Lizzy and Haha were eliminated simultaneously, now left Yoo Jae Suk, Gary and Song Joong Ki, the game resumed and not long ago the eliminated starting game was Yoo Jae Suk, he stood on not his turn. 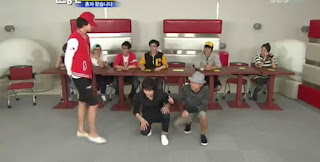 The final match between Gary and Song Joong Ki, what's interesting is Lee Kwang Soo acting as a physical trainer for these two members, he's not like Lee Kwang Soo, whose members are usually laughed at by Lee Kwang Soo's behavior and who won the second game is Gary, he gets Running Ball and Gary gives Song Joong Ki his card.

after that the members exchanged cards with the person beside him, and finally they agreed to play the musical chair in the last game and the one who got the thief card was Ji Suk Jin, the members got a Running Ball except Ji Suk Jin. 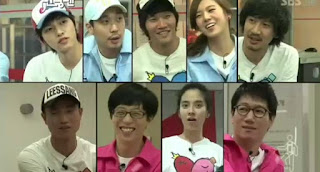 The blue team discuss a plans before they split up to search 4 telephones, if 4 telephones were found then immediately merge the code and contact to get the code the Running Ball lockers are.

Finally the third mission began, just as the Blue team started looking around , Lee Kwang Soo was caught by Yoo Jae Suk and Ji Suk Jin and finally he was eliminated. 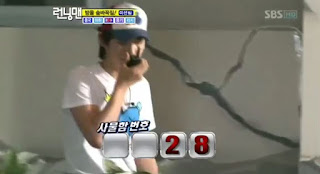 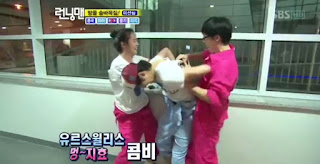 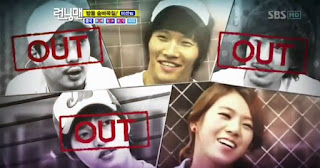 Only 30 minutes left to find the telephone, Lizzy managed to find a third telephone in the 2nd floor Traffic Accident area, and only one left telephone to open the Running Ball locker , when Haha searched on the 1st floor he was found by Yoo Jae Suk and finally eliminated , and the Red Team member left are Kim Jong Kook and Lizzy. 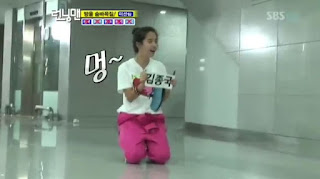 Only 10 minutes left Lizzy managed to find the last telephone, and the code where the locker was complete, but when she was looking for the Running Ball locker , she met Song Ji Hyo and finally she was eliminated, and after that the red team managed to tear Kim Jong Kook name tag , and the team who gets the Running Ball is the Red team. 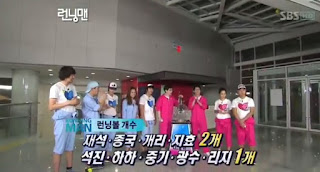 this time to using the Running Ball they collect, Yoo Jae Suk, Gary, Song Ji Hyo, Kim Jong Kook have 2 balls, while Ji Suk Jin, Lee Kwang Soo, Song Joong Ki, Haha, and Lizzy only have 1 ball, the first one to escape is Song Ji Hyo, the second is Ji Suk Jin, the third is Lee Kwang Soo, and the fourth is Lizzy, and the last is Haha, miraculously 4 out of 5 members only have 1 Running Ball which is free of punishment. 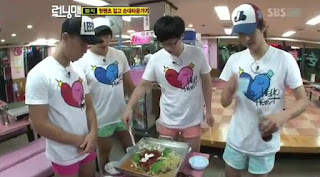 Yoo Jae Suk, Kim Jong Kook, Song Joong Ki, and Gary they have to receive punishment, wearing Hot Pants and they have to eat at the restaurant, they can't go home before food runs out
Tag : Running Man