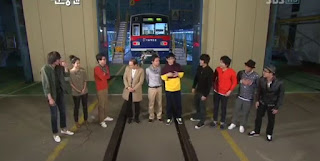 In this episode, Running Man is at Seoul Metro Subway Yard, this place has been opened since 1974, it is really amazing because every day before the train is used by residents of the city of Seoul , here the place for treatment, cleaning, is done before the train leaves, guest stars are invited times this is Tony Ahn (HOT), and Kim Kwang Kyu.

Before the first mission began, the members pretended to call Song Ji Hyo to see who made his heart rate increase and the same thing he hated, after that the members got ready to tease Song Ji Hyo. 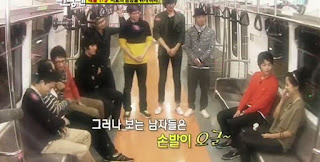 The first mission began, the first was Lee Kwang Soo, he tried to tease Song Ji Hyo but ended quickly after Lee Kwang Soo showed his magic trick, the second is Song Joong Ki unexpectedly after he teased Song Ji Hyo then whispered he instead kissed Song Ji Hyo's cheek suddenly, the other members were shocked after seeing him. 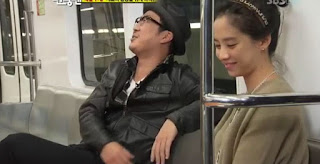 And then the fifth is Haha, when he tried to tease Song Ji Hyo instead to move away, and that made the Running Man members laugh, but Haha didn't just give up, he pretended to lie using Song Ji Hyo's thigh as a pillow, at that time Song Ji Hyo stands up and makes Haha give up to tease her, finally she is forcibly stopped.

The sixth is Gary, the name for both of them is Monday Couple because from week to week they are getting closer, Gary teases Song Ji Hyo with a song he himself wrote, holding his hand while singing, but when Gary expresses his feelings to Song Ji Hyo, Yoo Jae Suk immediately stopped them because according to him, the members were laughing, Kim Jong Kook, Haha and Gary didn't make Song Ji Hyo's heart beat reach 130 times per second. 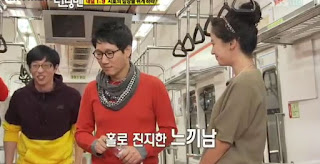 The remaining three members are Ji Suk Jin, Kim Kwang Kyu and Tony Ahn, if Song Ji Hyo manages to keep his heart rate not exceeding 130 times per minute, then the winner is Song Ji Hyo and he gets Running Ball, and the seventh is Ji Suk Jin, with acting stiffly he teased Song Ji Hyo and old words made the members laugh. 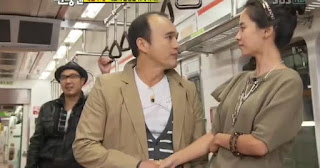 The eighth is Kim Kwang Kyu, he teased Song Ji Hyo by acting as a high school teacher, after asking how his father at that time Kim Kwang Kyu told Song Ji Hyo to look into his eyes and said "Our forehead looks the same", the Running Man members laughed after hearing it. 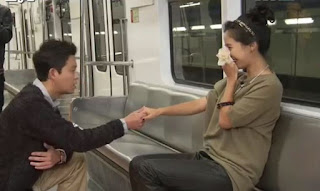 And the last is Tony Ahn, he teased Song Ji Hyo by making a confession of love in public, loudly Tony Ahn's voice while singing a song made Song Ji Hyo blush, and this time also still couldn't make Song Ji Hyo's heartbeat reach 130 times per minute, and the winner of the first mission is Song Ji Hyo, he gets a Running Ball.

The second mission begins, the mission is to play hide and seek to find 4 bags with a time limit of 1 hour, this time the blue team as a search team of members is, Yoo Jae Suk, Ji Suk Jin, Song Ji Hyo, Kim Kwang Kyu, and Tony Ahn, to The red team this time is Kim Jong Kook, Gary, Song Joong Ki, Haha, and Lee Kwang Soo, as the pursuing team they have to tear the five Blue team name tags to win the second mission, before that there are new rules this time, in 2 bags there are name tags that can save members who have been caught, and can only be used when the sirens sound.

Not long after that Yoo Jae Suk searched for a bag in the Train 3919 area, he met Kim Jong Kook, he tried to escape from the pursuit of the Red team which had surrounded in all directions, but he managed to escape the Red team after hiding behind the wall which is near the train.

Tony Ahn searched the Material Room area and he managed to find a second bag, but the bag were empty there was no name tag to turn on the member that had been eliminated, not long after that Yoo Jae Suk searched the Train 3919 area, when he was found by Kim Jong Kook, he ran to run away, but because he was exhausted he stopped in the middle of the train car to rest. 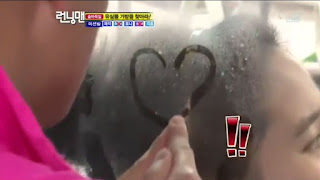 At that time Song Ji Hyo entered Train 3919 because he was chased by Haha from the Red team, she blocked the door so Haha could not enter, Gary didn't come long and Haha went to look for another member, Song Ji Hyo still holding the door so Gary couldn't eliminating it, and at that time Gary drew love at the door, then Song Ji Hyo laughed. 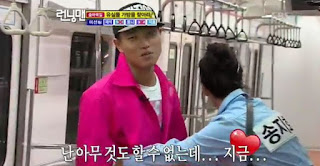 Song Ji Hyo was arrested by Gary, but Gary promised to let her go if she told how the blue team could be revived, and after that Song Ji Hyo told him, Gary released Song Ji Hyo for the second time when she was caught. 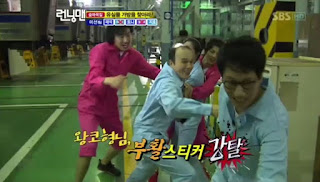 When the remaining 20 minutes the siren rang, that the blue team could revive the eliminated member, Song Ji Hyo ran to the prison to give the name tag, at the same time the red team chased her and finally the name tag was given to Ji Suk Jin and now Song Ji Hyo was eliminated , Ji Suk Jin escaped from the pursuit of the Red team after he got the name tag to be revived. 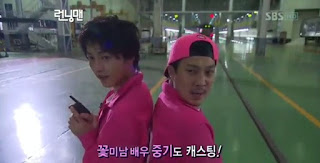 Remaining three members of the Blue team, Haha played with acting like he was in an action film, not long after that Song Joong Ki joined him, when Haha looked behind it turned out that Kim Jong Kook was behind him, then he ran to not be scolded by Kim Jong Kook. 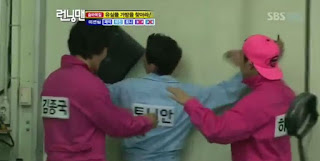 After that Haha found Tony Ahn hiding in the room, finally he managed to find it and call Kim Jong Kook to come with a walkie talkie, not long after Kim Jong Kook came and eliminated Tony Ahn, now there are 2 remaining members of the team, Yoo Jae Suk and ji Suk Jin.

For the remaining 10 minutes, Yoo Jae Suk managed to find a third bag in the train area 3919 and he went to jail to revive Tony to find the remaining bag, to trick Red Team Yoo Jae Suk sitting in prison acting that he had been eliminated, not long ago Ji Suk Jin was eliminated by the Red team. 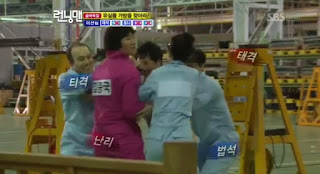 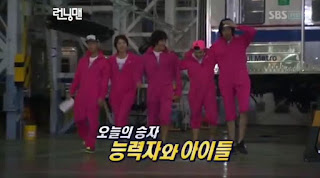 For the remaining 5 minutes, Tony Ahn searched the Han Yang Express area but just looking for him had been found by the red team he was finally eliminated and the winner the second mission is Read team , they get Running Ball. 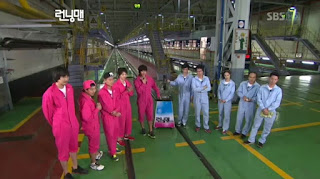 The first one to pass is Haha, and the second is Ji Suk Jin, and the third is Haha again, he can give the ball to the other members, and he gives it to Tony Ahn for not having a ball, the fourth is Song Joong Ki, and the fifth is Kim Jong Kook, and Haha uses the ball to drawn again and the name that comes out is Lee Kwang Soo. 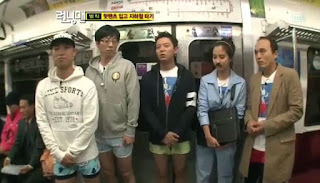