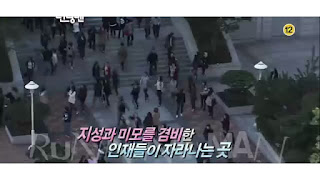 Running Man on this episode took place at Hanyang Women's University in Seoul. This episode consists of three missions, with each mission rewarded with Running Ball for the winner.

The first mission is a secret mission 1vs9. The second mission is to guess the title of the song with the help of female students. The third mission is a hide and seek race in the building. 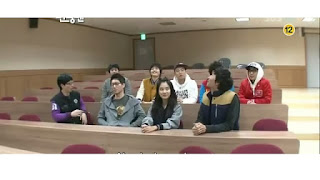 One hour before the opening of the Running Man show. The Running Man members including one guest star Go Joo Woon were gathered in a room inside the University campus.

They are holding a secret meeting with Producer Running Man discussing the 1vs9 mission. The producer explained that the guest star they would be trapping this time was CNBLUE's Jung yong Hwa.

The PD will make a quiz based mission to writing a sentences in Hangul letters. The Running Man members were required to place Jung Yong Hwa in the last place.

Running Man members and Go Joo Won were given the opportunity to memorize the answer that had been written on a piece of paper.

There was an incident where Lee Kwang Soo, who likes to make fake rumor, said that when he visited Ha Dong Hoon's house or Haha he discovered that Haha often collected Song Ji Hyo's hair like a crazy fan. Haha counter Lee Kwang Soo and scold him. But the stories continues. 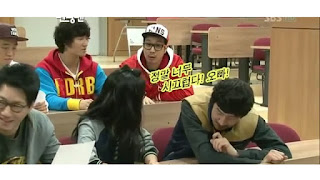 Yoo Jae Seok who was curious asked Song Ji Hyo, did he not have a slight feeling towards Haha. Song Ji Hyo answered 'Yes' in a low voice but it was still heard by Haha who was behind her.

Haha tells Yoo Jae Seok that she also doesn't have any meaningful feelings for Song Ji Hyo. Then Song Ji Hyo suddenly cut off Haha's conversation, and said that Haha was really noisy.

Hearing Song Ji Hyo say that. Haha who feels she has never disturbed Song Ji Hyo. His emotion suddenly exploded, like a crazy person he said to Song ji Hyo that this time Haha would really be noisy and bother him.

Haha said he would send the text bomb to Song Ji hyo. Bother him every night with a prank phone so she can't sleep. He bragged that It only takes a few moment for haha to do it all. The other members laughed at Haha who was having an emotional disturbance. 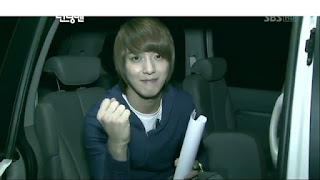 His task is to retrieve a right answers from the 3 Running Man members when the quiz based mission takes place.

Of course the Running Man didn't know that this 1vs9 mission was actually proposed by Jung Yong Hwa CNBLUE. 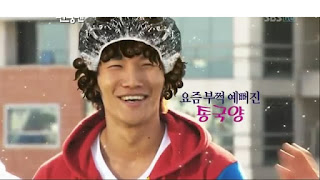 The Running Man members who are currently holding an opening on the roof of the building engrossed in discussing Kim Jong Kook curly hairstyle.

They assumed that because of its location in a women's university, Kim Jong Kook accidentally changed his hairstyle. 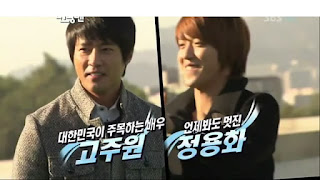 Then the conversation turned to Song Joong Ki, who at this time can always be present on the Running Man program.

Yoo jae Seok greeted the two guest stars, he said Jung Yong Hwa had been in the Running Man episode before. And to Go Joo Won who was just there for the first time. Of course they were all just being acting at the time. 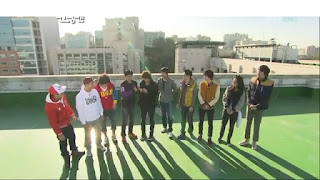 Yoo Jae Seok who at that time suddenly lost direction in the flow of his conversation asked PD Running Man, whether they would do hide and seek at that time.

Running Man PD answered 'yes'. Yoo Jae Seok was then protested by the other members who said that of course at that time they would play a hide and seek mission.

Then they entered the study room and the 1vs9 battle began. 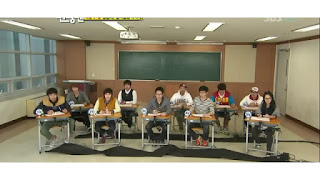 In this room they will be given a quiz with a total of ten questions, they have to listening to a sentence in Korean. Then they are obliged to write it on a piece of paper with hangul letters.

Here there is a special performance from college students, announcer Park So Hee from Hanyang University as a quiz reader. Her voice was indeed suitable for an announcer.

Song Joong Ki said that he also had a broadcasting background from the University. Haha then mentioned that his sister-in-law was also an announcer. He meant the wife of Yoo Jae Seok who was an SBS announcer. 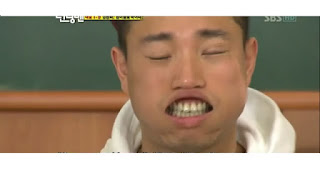 Then the quiz begins. The Members running Man still thought that Jung Yong Hwa CNBLUE didn't know anything about the secret mission 1vs9.

To avoid suspicion from Jung Yong Hwa, Kang Gary sacrificed himself by answering the question incorrectly, he received a punishment for answer incorrectly and his face was hit by a blast of strong wind comming from the blower. 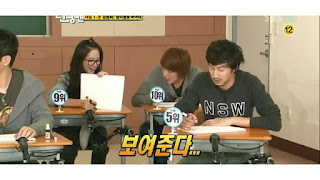 This means that Jung Yong Hwa only needs one more answer from the Running Man member so he will get a Running Ball. The last person is Haha. Ha ha ha.. 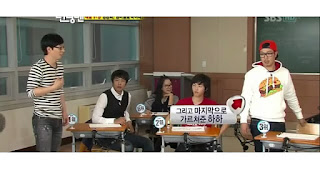 At that time PD Running Man announced that the mission ended and rewarded Jung Yong Hwa with a Running Ball.

The members were confused because at that time the quiz question was not finished. Then PD Running Man tells that the 1vs9 mission is actually an idea from Jung Yong Hwa. To complete the mission Jung Yong Hwa must retrieve 3 correct answers from the Running Man member.

And the member who gave Jung Yong Hwa the correct answer was Yoo Jae Suk, Song Ji Hyo and Haha. Then they went on to the second mission. 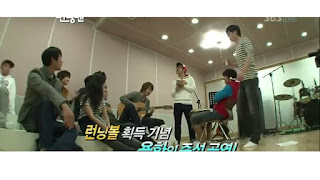 In a studio music room like, Jung Yong Hwa held a sudden celebration concert while waiting for the female students who were coming to help with this second mission.

With Haha as lead vocalist and Kim Jong Kook holding drums. they were all absorbed in the concert. 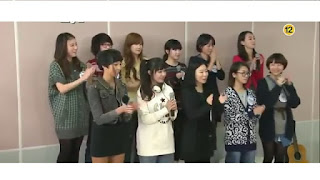 Then eleven female students arrived. They were deliberately presented to help assisted the Running Man members in this second mission. That is guessing the title of the song by playing a musical instrument that is available on the spot.

Running Man Members are divided into three teams to fight for Running Ball. Each team can choose one student as an assistant in this mission. 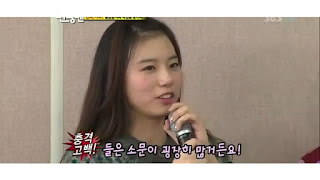 At that time there was a student who claimed to be from the same school as Lee Kwang Soo. The student named Lee Eun Yeong then leaked Lee Kwang Soo's past secrets.

Lee Kwang Soo is a transfer student, and he is known as a person who likes to hit his friends. Then he spat when he left the classroom, and a player who never refused a woman who expressed feelings to him.

Kwang Soo is finished, his secret has been revealed. 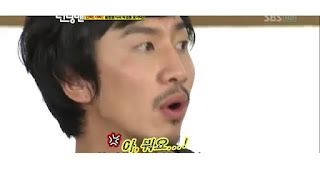 Utilizing the moment Lee Kwang Soo then acted as a thug. He cursed Yoo Jae Seok, who at that time was asking him. The members laughed at Lee Kwang Soo's behavior.

Then they turned back to the mission. They were given the opportunity to ask a question to the female students. Then they will make their choice later. 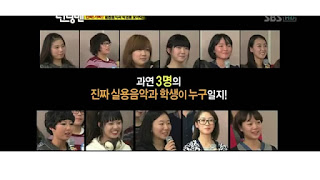 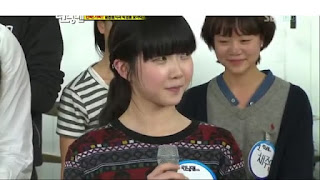 It turned out that their choices were all wrong. the three of them were not college students from the music faculty.

Lee Seung Jin turned out to be a student of the broadcasting faculty first year. Chae Joo Yeon is from the processed food faculty. And finally Lee Eun Yeong, the person who leaked Lee Kwang Soo's secret came from the knitting design faculty. 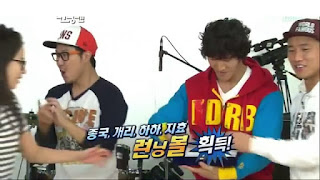 But in my opinion they benefited a little, because the two songs that were successfully guessed were originally a single hit from Kim Jong Kook and Kang Gary Leesang.

They also managed to win over the other teams and were rewarded with a Running Ball. 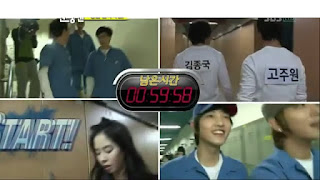 The last hide and seek mission began. They are divided into two teams namely the red team and the blue team.

The task of the blue team is to find four bells and then ring them as soon as they found it. The location of the four bells was sent via sms and they were given time 1 hour limit for completing the task. The task of the red team, of course, captures all members of the Blue Team.

The location of the mission this time is the Hanyang women's university design center building. This building consists of 7 floors and 1 basement floor. In this mission the Blue Team can request assistance from female students in the building. 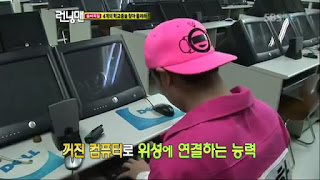 Haha, who is on the red team, extremely explores his role by pretending as a detective who is searching for a fugitive. He pretended to use a dead computer, to connect with satellites to find the location of the blue team.

With confidence he pointed to the dead computer screen while shouting 'found it'. Then he ran out of the room to the basement floor like a madman. 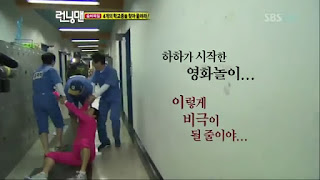 Remarkably Haha found the blue team which at that time happened to be on the basement floor.

But unfortunately because at that time Haha outnumbered by the Blue team. He was then dragged and interrogated by Yoo Jae Seok, Lee Kwang Soo and Ji Suk Jin about the location of Kim Jong Kook's whereabouts.

Then help arrive the commander came to the Basement with Go Joo Won. The situation changed Lee Kwang Soo was caught and was eliminated by Go Joo Won. Meanwhile Yoo Jae Seok and Ji Suk Jin managed to escape from the red team's pursuit. 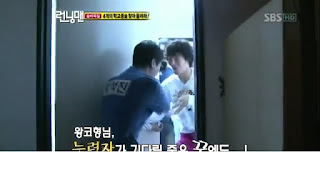 Yoo Jae Seok manages to find the first bell and rang it. Ji Suk Jin also managed to find a second bell and managed to ring it. But unfortunately he was caught by Commander Kim Jong Kook and was successfully eliminated.

Thus there were only two more bells left to win the prize. The blue team is getting closer to victory. 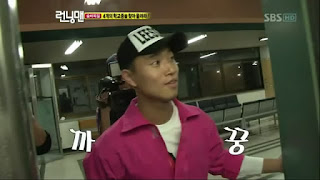 Yoo Jae Seok who was in the elevator and chatting with the students was caught by Kang Gary. Yoo Jae Seok tried to escape the pursuit of the red team but eventually he was caught and eliminated.


In the prison these three people met with a group of college students and got a leaked that they or the college female student had knitted special costumes for those who were punished at the end of the episode. 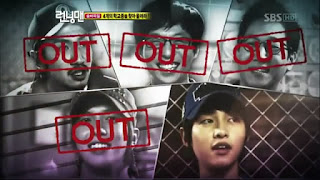 Jung Yong Hwa managed to find the third bell but later he was also caught by Song Ji Hyo  and then successfully eliminated by Go Joo Won.

The lucky Song Joong Ki managed to sneak in and with the help of the beautiful students found the last bell and rang it. 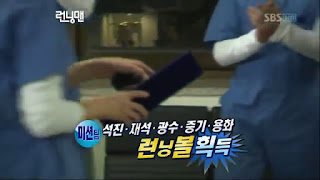 Thus the blue team wins the mission, and gets Running Ball as a prize. The red team looks very unhappy with the final result. Because they did not succeed in getting a running ball so their chance to receive the punishment is bigger and they don't like it. 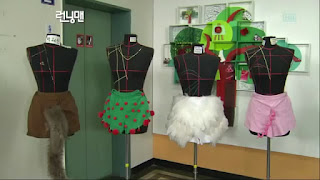 Four special handmade hot pants that still fresh from the oven, made by the beautiful female college student is ready to hit the road. Who is the lucky person that have to wear this magnificent hot pants. Well they have make a draw for it. 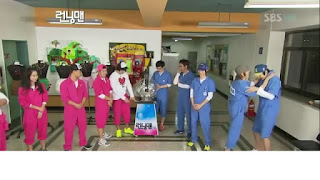 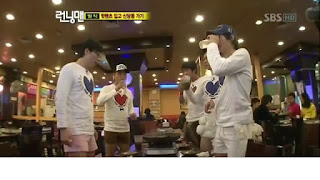 They undergo the punishment which is going to restaurant to eat while wearing special hot pants. End of episode.
Tag : Running Man