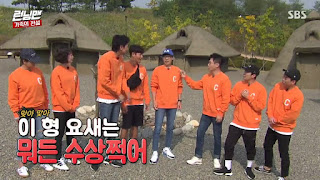 In this episode, Running Man began its opening at the location of Oido Prehistoric Park. In this place there are several ancient human replica statues and some ancient houses. In this initial location there are several hut which will be used as the place for the mission this time. This time the members of the running man wore orange long sleeves. Jeon So Min ask Ji Suk Jin why he was wearing clothes, and other members added that Ji Suk Jin usually wore animal hide. 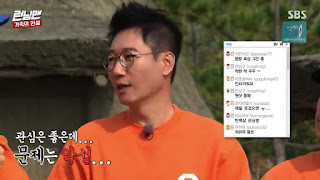 They were busy talking about the events in the previous episode where Yoo Jae Suk and Kim Jong Kook were acting weird and unpredictable according to Haha and Lee Kwang Soo. But interestingly at the end of this episode it turned out that it was Haha and Kwang Soo who would betray the other members. But then suddenly the focus shifted to Ji Soek Jin, who told me about himself getting lots of scathing comments from Running Man fans on the web. 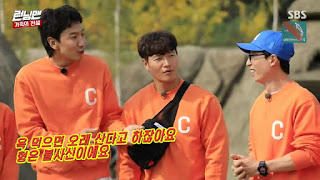 The always annoying Lee Kwang Soo said to Ji Suk Jin that criticism can extend life, and with so much criticism that Ji Soek Jin received should be an eternal human. This invited laughter from the other members including Ji Suk Jin himself. But with great heartedness, Ji Soek Jin said that he liked criticism. 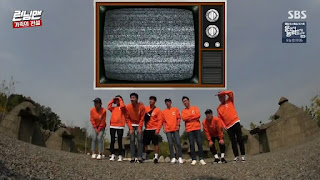 Then later the Running Man members get a video message. Here it is told that the video message came from their father and that they were all members of Running Man were siblings. Then slowly a shadowy figure appeared. The members try to guess who the figure is, but nobody knows. Until finally the picture appeared clearly. 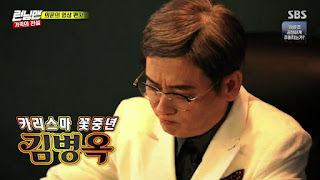 Apparently it was Kim Byeong Ok, the figure who played their father in the video was Kim Byeong Ok. In this race the Running Man members are required to guess the father's favorite food. By doing various missions, they will get a clue about the name of the dish. 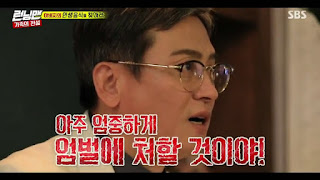 Here it is told that their grandmother always made her a delicious dish in the autumn season. But Kim Byeong Ok can't remember what the name of the food is. Here the task of the Running Man members as Kim Byeong Ok's children is to find out about the dish. Then they are given a grace period of six hours and if successful they will get all the wealth of the father. But if they fail to meet the deadline they will get a big sentence at the end of the episode. 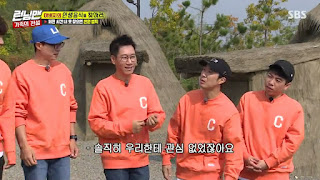 Haha protested saying what kind of father would have the heart to leave his child. then suddenly forced his children to look for food and give punishment if they failed. He said that he would leave this game. Lol 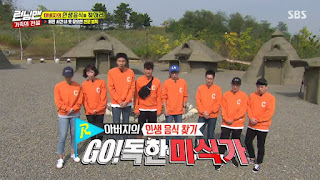 Then the race began and was called Go Find Determined Gourmet,In this race the Running Man members will be given several missions and must complete it to get a hint. After getting the hint then the members must guess the name of the dish, and find the restaurant that provided the dish and order the meal. 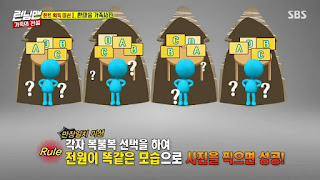 The first mission at this time was about choosing the same choice. So this time the Running Man members will enter the Hut that has been provided on location. Each member enters a different Hut and they must choose an item provided by the Staff inside the Hut. Then they have to go out while carrying the items of their choice. They will get a hint if the eight Running man members choose one similar item. 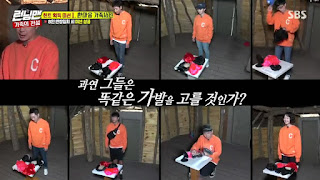 At this time the members entered the Hut and were told to choose wig items. There were only four wigs to choose from, but this time they were unable to bring the same item. 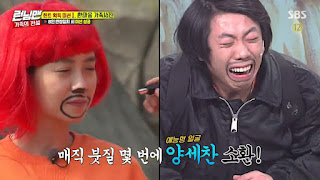 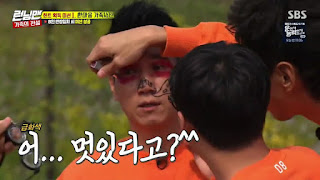 Next, Ji Suk Jin gets his turn messed up on his face, because he chooses the wrong glasses item.

They still failed to choose the same item, then they reentered the Hut. Inside they must choose one name tag for the member whose have the ugliest face. Haha clearly shouted a hint to the members that they must choose a plain face without wearing any accessories. The other members clearly chose Yoo Jae Suk. But at that time there were two people who did not vote for Jae Soek. Song Ji Hyo who chose Se Chan, then Yoo Jae Suk who chose Ji Suk Jin. 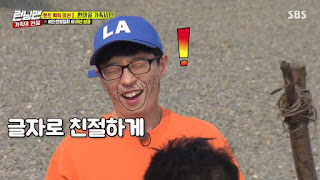 This makes the members furious because Yoo Jae Suk doesn't choose himself. And decided to punish him by tattooing his cheeks with a tattoo that says ugly on both of his cheeks.

Haha said to Jae Seok that you should accept who you are as the ugliest member. This is savage.

Finally afther a while the mission ends, and they get their first hint. 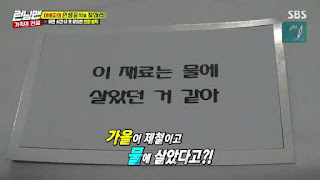 The first hint is "Lives in water".The members tried to combine the hints they got with the information received from the video at the beginning of the opening.

Finally they choose Jumbo Shrimp, because its the season now for Jumbo Shrimp in Oido. Then they rushed to the vehicle and went looking for a restaurant selling Jumbo Shrimp.

But unfortunately their guess is wrong. as a punishment they have to eat food in the restaurant. However, not all members can eat Jumbo Shrimp dishes at the restaurant. 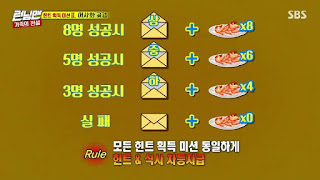 They were given three minutes to successfully eat all dried persimmons, with a total of 8. But unfortunately there are only five people who managed to eat the fruit. Song Ji Hyo, Yang Se Chan and Lee Kwang Soo failed.

They managed to get medium hints and 6 servings of dishes. This means that there are two people who will not eat. Yoo Jae Suk suggested a race of wits, this time the race of wits was a quick stand up from the seat while sequentially saying numbers, the last person standing or the person who was wrong to say the numbers would be eliminated. Kim Jong Kook became the first person to be eliminated because he became the eighth person.

Next, Haha and Yang Se Chan stand together at the same time while mentioning the same number. Both of them were eliminated. But to get a place to be able to eat their food, both of them have to compete with intelligence to answer the questions given by Yoo Jae Suk. 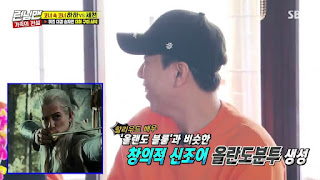 The question is about the capital city of Singapore and Mongolia. The first answer Yang Se Chan is, Changi. He thinks the airport's name is the same as the country's capital. This was discussed by Ji Suk Jin and Se Chan was ridiculed by Suk Jin. The second creative answer is the Mongolian capital Ulaandobuntu, whose name sounds like the artist name Orlando Bloom.

After that they all ate except Yang Se Chan and Kim Jong Kook. 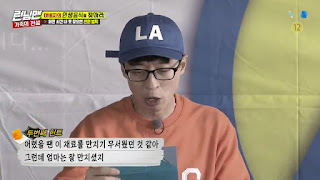 The second Hint was "when I was little I was afraid to hold this thing, but my mother didn't seem afraid"

All members agreed that the answer was Blue Crab, then they immediately went to the Blue Crab restaurant. Meanwhile Haha went to the toilet for a while, but apparently she called someone and received shocking information. He got a telephone number on the plate where he had just eaten. Later at the end of the episode there will be 2 more people who will get the telephone number. Then at that time the team will be divided into two.

But unfortunately it turned out that Blue Crab wasn't the answer. So here they also have to play a mission again to get a new hint at the same time so they can eat Blue Crab dishes at the new restaurant.

At the new restaurant, they play a game of blowing ping pong balls over glass bottles placed upside down on the table. The goal is to put the ping pong ball into a plastic cup placed at the end of the table. 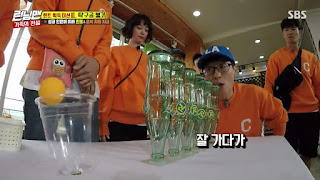 They managed to get a medium hint, with 5 people who managed to put a ping pong ball into a plastic cup. But there is one funny thing happen here. That is when Yoo Jae Suk failed to enter the ping pong ball but he was angry and told Kim Jong Kook to scold the staff. 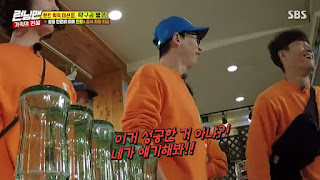 Kim Jong Kook laughs at Yoo Jae Suk telling him to scold the staff. But in the end after the producer heard Kim Jong Kook's explanation and saw the video re-recording, Yoo Jae Suk was declared successful in entering the ping pong ball. Funny Jae Seok.

This time only six people can eat and two people who do not eat are Ji Hyo and Suk Jin. 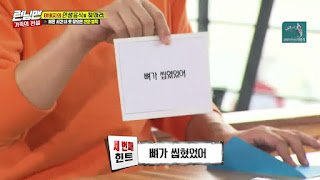 The third hint is "The thing has a bone". Gizzard Shad is the answer of the members but their answers are still wrong, so they have to play a mission again to get a new hint.

The next mission is quite easy, namely magic bowling, using marbles as the ball and markers as the bowling pin. 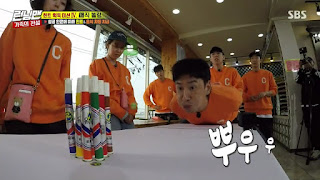 At that time Lee Kwang Soo in the cheater king cheated by blowing the markers with a loud blow so the markers all fell to the table.

They get medium hint "Ji Suk Jin face remind me of this fish", Yang Se Chan and Yoo Jae Seok are two people who don't get a portion of food.

Loach soup is the name of the dish Kim Byeong Ok wants to eat. They finally managed to guess correctly. 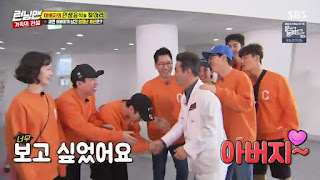 Then after that they went to buy Loach Soup at a nearby restaurant, then they left for the last place. That is a museum in Oido to meet Kim Byeong Ok, their father.

Here Running man member will be divided into two teams, the first team is the Yoo Jae Suk team, the second team is the Big brother team. Kim Byeong Ok turned out to be not their father but his father's eldest son who had long since disappeared.

And the other three members of Kim Byeong Ok are Haha, Lee Kwang Soo and Song Ji Hyo. They are the ones who call Kim Byeong Ok and find out the truth that he is actually their oldest brother. 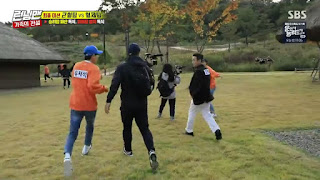 In this race, Kim Byeong's group Ok lost. Their name tags are all successfully retrieved. 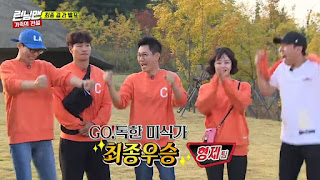 Yoo Jae Suk's win team and they all finally deserve to get a prize of dried persimmons. And two people from the losing team must face punishment, throwing their faces with the cream from the cream throwing machine. 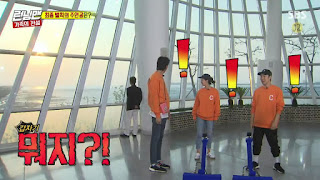 Kim Byeong Ok pretended not to hear while looking at the sunset. Its was epic
Lee Kwang Soo and Song Ji Hyo are two people who are less fortunate and have to undergo the sentence. 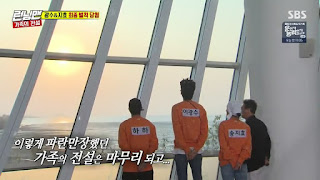