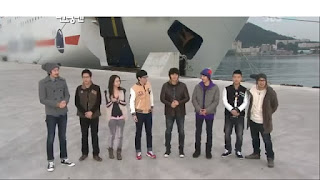 Running Man started this 18th episode in a port somewhere in Busan located near Gwangandaegyo or Diamond bridge, the second longest bridge in the country or South Korea. Behind them was a large cruise ship ready to depart.

They will stay on the cruise ship for one night, hmm.. i smell a romance mission!. There are three mission that will be held inside the ship. First 1vs8 mission, the second mission is romance mission on the boat, the final mission are hide and seek mission. 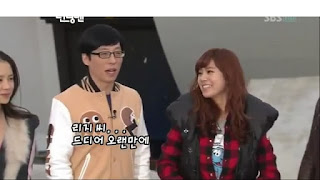 Today guest star is a woman from Busan, She is Lizzy. Lizzy is not a stranger to running man member, she often appears in early episodes of running man.

By the way just for information she change her promotion name to Park Soo Ah in July 2018. 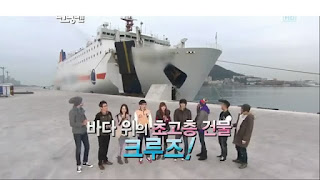 In the sea behind them there are a big residential water cruise ship that are ready to depart from the port. And that not just for show, the Running Man mission will be held on that big boat.

Yes  they are are going to play the mission while going on one night trip on the luxury cruise boat. That's definitely feel like a holiday. 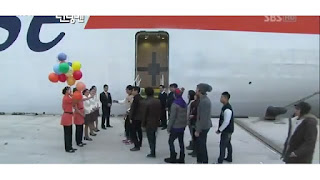 Running Man members are preparing to enter the cruise ship. The crew of the ship have prepared to welcome them.

They were were fascinated by the facilities installed inside the ship. 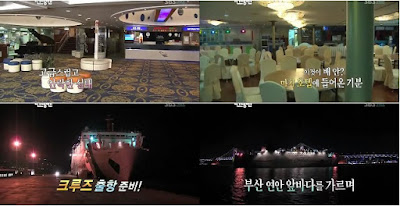 There are an a escalator that bring them upstairs to a large cozy luxurios room, and there are large restaurant area prepared for passenger convenience. And also there are residential cabin room for the member to sleep.

After dark, the ship left the port. The ship head to Gwangandaegyo or diamond bridge for the travel destination. It is one of the best tourist spot at night. 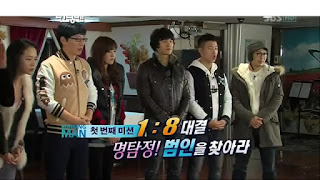 Inside the ship the Running Man members are getting ready for their first mission, its a 1vs8 mission. The name of the mission is A Detective Night, there is one person that has not been selected yet will become the criminal.The mysterious night-time man who has not been selected was ordered to interrupt mission performance.

There are 4 round in this 1vs8 mission. In the limited 100 second time, they must sing a part of a song that the PD requested. There are nine people who will sing a nine different song, that's difficult. If they manage to sing nine song correctly within just one round they will win this mission. And 8 people will get Running Ball.

Unfortunately that's not going to be as easy as they think because there is a one person or  criminal  (범인) who will try to sabotage their mission and win the Running Ball for himself. 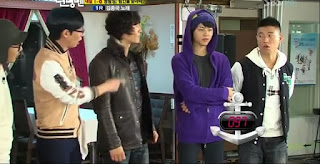 After Song Joong Ki, Na-eoliljeogkkum (나어릴적꿈) or My Childhood Dream picked by Kim Jong Kook to sing, next Yoo Jae Seok picked Walking On The Spot (제자리걸음). After Yoo Jae Seok, Ha Ha failed to sing a Kim Jong Kook song. There is still time but in the remaining time they failed to clear the first round. Resulting they are being punish by their own manager. Armed with plastic cone this army of manager attack the member mercilessly. 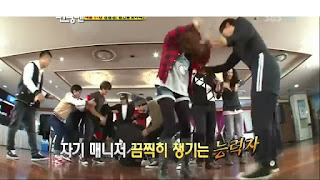 On the second round PD requested any Trot ( a genre of korean music pop, maybe like old school pop) song. But again the Running Man member and Lizzy could not clear this round, they are being hit by their manager again.

On the Third round the PD requested a song about Sea or Busan. And they failed again for the third time. The PD give Last chance to sing an Idol male group song within 50 second. And guest what, disappointedly they did not manage to clear the final chance round given by the PD. 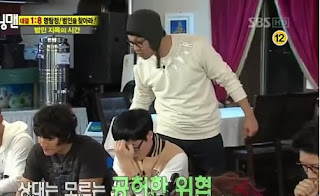 Haha is the first one to vote, He walking behind Kim Jong Kook give him a ridiculous stair then give a provocative hand gesture to Kim Jong Kook and Yoo Jae Seok like he have some kind of deep grudge to both of them. The staff and PD are laughing the scene that is happening in front of them. Haha just love to make other people laugh with his attitude. But he then have to vote and choose Song Joong Ki. 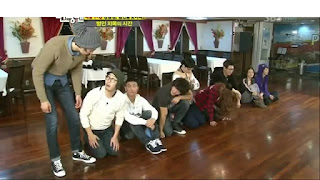 Haha didn't realize the action was seen by Lee Kwang Soo. When it's time for Lee Kwang Soo's turn to vote. He walked to the side Haha. Haha then see Lee Kwang Soo face and surprise to see Le Kwang Soo because at that time he gives a challenging face to Haha.

The other member seem did not realize this, but Haha know what exactly Lee Kwang Soo trying to do. Lee Kwang Soo mimicked what Haha did to Kim Jong Kook and Yoo Jae Seok. Lee Kwang Soo give a warning to Haha. Haha hold his stomach and laugh. He didn't believe Kwang Soo saw that incident. 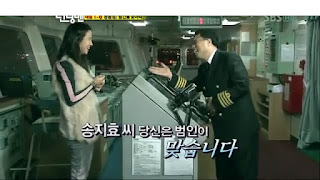 Song Joong Ki was picked as the most suspicious person in the entire round by the other, He get 5 vote. That' a lot, but sadly he is not the criminal.

Song Ji Hyo is the real mysterious person who selected as criminal (범인) by the cruise ship captain. 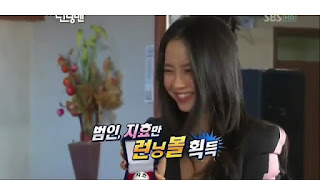 Song Ji Hyo win the running ball for herself, with her good acting performance Song Ji Hyo managed to fool all the Running Man members.

Next they move to the top outside section from the cruise ship. Here they will begin their second mission. 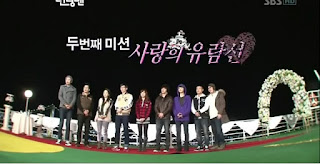 Nine people have all gathered outside the ship, here they have a great view of the Diamond Bridge which at the time the sight of hundred of light radiated from the bridge. Make it looks beautiful and produce a perfect condition for the second romance mission. And the second mission begin.

First person Lee Kwang soo make an instant short semi romantic drama, with Song Ji Hyo as his partner they are pretending having a date on the ship. Lee Kwang Soo pretend he come late for the date and then scold Song Ji Hyo for his drink habbit, at the end he make a confession to Song Ji Hyo that he is actually a child. Its actually funny but Lee Kwang Soo was forced to stop the drama by Yoo jae Seok.

Next the madman Haha made a quick drama scene with Song Ji Hyo and Lizzy. Haha was standing first and then he ordered the two beautiful ladies who were sitting on the chair to stand up, Haha took the chair from the two ladies and then sit on one chair while he rested his legs on another chair. He act like he was a prince and give a congratulation to the ladies because they the ladies have a chance to meet him.

Haha was mad, he laugh, but then when he tried to rested his leg to the chair for the second time, the chair fell. The other Running Man member laugh at Haha and mocked Haha for having a short feet. It was a disaster for Haha. 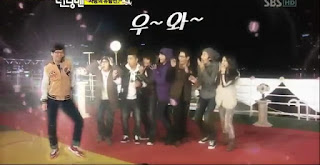 Next Yoo Jae Seok with Lizzy. Yoo Jae Seok pretend that he was a dance prince from the high school. He make a hyperbolic entrance with his dance performance. 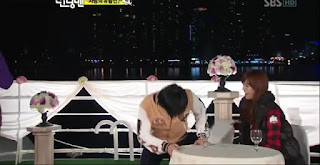 But unfortunately his great entrance end miserably. When he tries to sit next to Lizzy, Lizzy took the chair from Yoo Jae Seok. Yoo Jae Seok falls in a ridiculous way after trying very hard with the entrance.

At the end of the second mission, Kim Jong Kook, Lizzy, Kang Gary and Song Ji Hyo are the winner. The four of them get one Running Ball each. Next are the hide and seek mission. 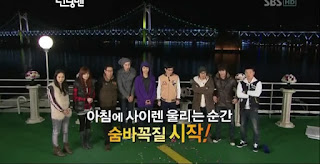 The pirate group consists of three people. Kim Jong Kook, Haha and Kang Gary. The game will start in the morning a few hours before the ship returns to the port.

A Few moment before they go to their own cabin. The Seeker group receive an sms from the PD which contain the information of the mission. The must search for 6 part of a treasure map that are hidden inside the ship in the morning. The ship horn will be the sign that the hide and seek game has started. 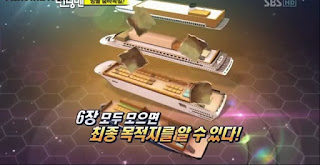 The six piece of the map will be hidden inside the ship at a random location. But first they have to go to sleep because they still have a long time before the final mission started. Yoo Jae Seok shared a room with Ji Suk Jin. Song Ji Hyo with Lizzy, Lee Kwang Soo with Song Joong Ki.

They have change their clothes with the costume that prepared by the staff. Except Ji Suk Jin he is still havent change his clothes. 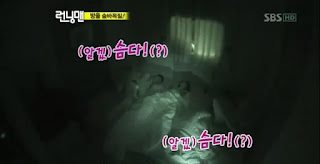 Meanwhile the pirate team has wearing their pirate uniform before they go to sleep. They were well prepared for the mission.

Both of the group member has fallen into deep sleep. 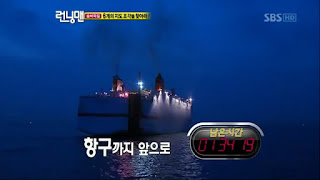 The sound of the ship's horn broken their dream, The final mission has started . In the blue team or seeker team, the first person awake from their sleep is Lee Kwang Soo and Song Joong Ki. It seem like they didn't sleep at all.

The two youngster immediately leave from their cabin to wake the other member. After that the blue team started to search the six pieces of the map. 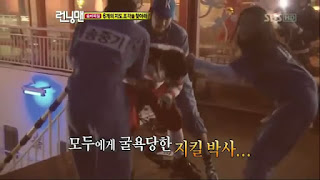 The red team or the pirate team has wake up, and started to search the blue team to eliminate them. Haha at that time found Song Ji Hyo but instead of eliminate her he was beaten up by Song Joong Ki, Lee Kwang Soo and Song Ji Hyo. Poor Haha he was outnumbered by blue team. 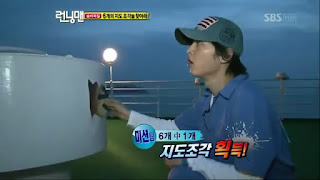 Song Jong Ki finally found the first pieces of the map, he was helped by Yoo Jae Seok who sacrifice himself distracting red team attention from Song Joong Ki. 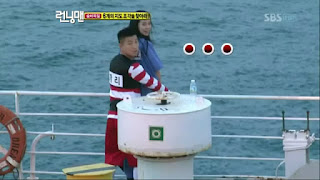 Gary faced Song Ji Hyo, but because he felt indebted to her for choosing him on the second mission last night. Kang Gary didn't elimate her. He said he would release Song Ji Hyo if she willing to do a titanic scene with him.

Believe it or not, it turns out that the two people who came from different teams really did repeat titanic scenes.

Kang Gary at that time did not realize that his actions had provoked someone's anger. He heard someone shouting from behind him, apparently it was the Commander Kim Jong Kook 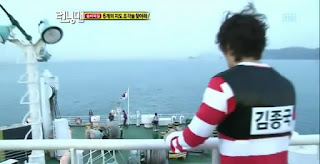 Kim Jong Kook who saw Gary's behavior at the time began to scold him. Kang Gary who realized that Kim Jong Kook was angry at him immediately ordered Song Ji Hyo to escape, he kept his promise. 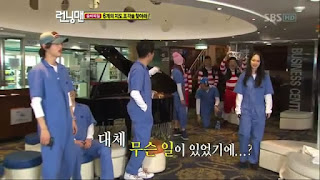 One by one the blue team members were caught, until finally it was the turn of the Ace Song Ji Hyo who had not been caught.

The blue team members had great hopes for Song Ji Hyo.However, the hope finally shatter when the last member of the blue team was finally caught by the pirates team.

The race ended, time for the unlucky member to receive the punishment using hot pants 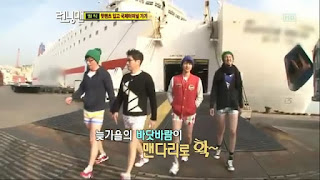 They are Lee Kwang Soo, Ji Suk Jin, Yoo Jae Seok and Song Joong Ki. They have to get out of the ship heading to the port using hot pants with style. 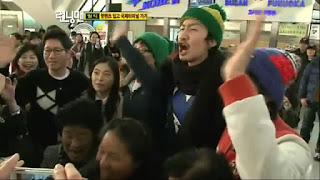 At the port they were warmly welcomed by dozens of Running Man fans. End of episode.
Tag : Running Man