This episode of Running Man show taking place at Korean House (한국의집) in Jung-gu, Seoul it said that the house was once a private residence of a mastermind Park Paeng-nyeon, a scholar from The Joseon Dynasty.

The reason they held an event at this place was because this house was a place specifically for providing traditional Korean food, that is related to second mission.

But beforehand there were special performances from Song Joong Ki and Lee Kwang Soo who at that time were playing in dramas Sungkyunkwan Scandal (Song Joong Ki) and Dong Yi (Lee Kwang Soo), the drama setting happened to be related to the joseon dynasty era. Maybe they were promoting their drama while add spice to the Running Man show. 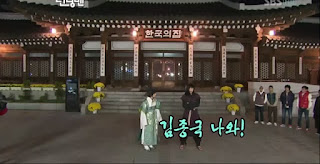 Lee Kwang Soo intentionally made a fuss by calling Kim Jong Kook before him. he said 'Kim Jong Kook came out!'.

Kim Jong Kook, who realized his name was called by Lee Kwang Soo at the time, did not feel comfortable with Lee Kwang Soo's summon. But slowly he came forward to Lee Kwang Soo. 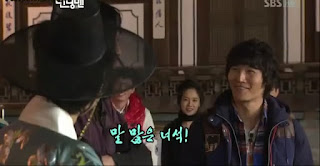 Kim Jong Kook asked Lee Kwang Soo 'what's wrong?'. Lee Kwang Soo with a fierce face said 'You're look like a girl!!'. Song Joong Ki and all other member laugh because of this Kwang Soo scandal. Maybe this has something to do with the drama where the female main character disguised as a man.

But then when Kim Jong Kook asked 'can I returned to my starting position' Lee Kwang Soo politely said 'yes'. After that Yoo Jae Suk and the other Running Man members entered and joined Lee Kwang Soo and Song Joong Ki. Then Yoo Jae Suk who was acting as an MC called out to guest stars.

The person who first entered was Lizzy, at that time Lizzy was introduced to have become part of the Running Man family. Maybe it also mean that she was a new member of Running Man.

And the real guest stars for this episode are Nickhun members from 2PM. Yoo Jae Seok asks about Nickhun's condition when in the previous episode he was present as a guest star. Nichun said that he was fine, the next day he slept for 14 hours.

Lee Kwang Soo made the story that he had heard rumors that before Kim Jong Kook went to Thailand, he had made a reservation for his eyelid surgery. Kim Jong Kook and the others laughed at Lee Kwang Soo's story.

They have all entered a room. In front of all of them there is a microphone except in front of Haha. The first mission this time is 1vs9, the theme of the mission is that they will compete in term of knowledge with Haha.

Haha will make his own question and the other members must guess it. If among the nine people there are succeed in answering five questions correctly then Haha will lose, and the nine people will get Running Ball.

But if they don't succeed in answering five questions with the right answer then Haha will get the Running Ball. But beforehand they would test how great Haha's knowledge was by giving him a number of random questions. Yoo Jae Sook who will be the one that asking the question. And they both come forward facing each other with the two microphones in front of them. The microphone will blow strong winds if Haha takes the question with the wrong answer.

In the test of three questions Haha can only answer one question correctly. After that Haha was moved into another room to make 9 questions. With a ridiculous facial expression, he was sure that he could fulfill the mission this time.

Then the intelligence test mission with Haha began. The person who was first called Haha was Yoo Jae Seok, Haha asked a question about the name of a beautiful artist who plays a movie for adults. What the..? Haha thinks that Yoo Jae Suk won't dare to answer that question, but Yoo Jae Suk knows it and successfully answers it correctly.

The second question about Song Ji Hyo's weight and the person that what was called to answer that question is Nickhun. Nickhun carried Song Ji hyo to test his weight. But he guessed wrong.

When Nickhun carried Song Ji Hyo, Kang Gary looked like he was turning his face away with an unhappy facial expression.

The third question about Bob Marley. The Running Man members cheered happily when they heard the word Jamaica, a moment before they had predicted the question would appear. Lizzy who was chosen by Haha for the third question managed to answer it correctly.

The fourth question about a riddle. Song Joong Ki who was chosen by Haha failed to answer correctly. Next Ji Suk Jin managed to answer the fifth question correctly, but on the sixth and seventh questions Kang Gary and Kim Jong Kook gave the wrong answer. The final score 4-3 Haha excelled for a while.

On the eighth question Haha asked Song Ji Hyo about a funny incident where in the previous episode In a quiz Lee Kwang Soo cheated on rectifying his answer after hearing Song Joong Ki's answer. Haha asked what Lee Kwang Soo answer was at that time.

On the last question because it was too difficult, Lee Kwang Soo asked for a hint from Haha. Lee Kwang Soo was knealing while asking for the hint. But Haha didn't want to accept his request, he wanted his leader (Kim Jong Kook) to kneel down. 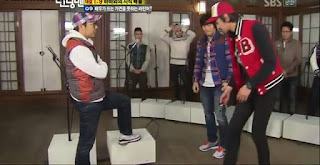 Feeling happy with Haha's request, Lee Kwang Soo enthusiastically walked towards Kim Jong Kook and forced him to kneel to Haha. Kim Jong Kook seems not willing to do such embarrassing things. Lee Kwang Soo then took a roll of tape. Then he threw it at Haha while saying to Kim Jong Kook take the tape to make you a little better. 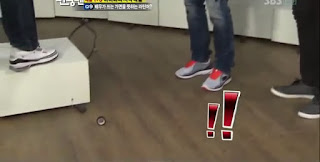 The others laughed heartily seeing the behavior of those the three people who were like a child. Kim Jong Kook was willing to kneel to Haha on the condition that Lee Kwang Soo had to push him from behind so as if he had fallen in front of Haha.

In this second mission, the members were in a large cooking room. They have also been wearing chef's costumes. Judging by the color of the chef's costumes they used, they appear to have been divided into three teams.

Today they will cook traditional Korean dishes. And before them there were secret materials covered by a food covering . And of course their cooking results will be assessed by international cook judges who are experts in the culinary field. 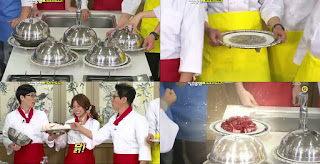 Next Kim Jong Kook from Blue Team chose a tray, but at that time Kang Gary and Haha forced Kim Jong Kook to choose the big tray. Kim Jong Kook was a little angry and asked Nickhun, Nickhun agreed with Kim Jong Kook's choice. They opened their closed trays and managed to get beef as their ingredients.

They were given a time limit of 40 minutes to cook their food. When it began they immediately took their respective ingredients to the cooking place.

The Red Team briefly discussed the food they were going to make, Yoo Jae Suk decided to make 닭떡갈비 (Chicken Rice Cake). The Yellow Team was seen discussing for a while, Song Ji Hyo said it was better to make 김치낙지수제비 (Kimchi and Octopus Soup). Team Biru will make 육우갈비찜 (boiled beef), they think foreigners don't like soup, so they will make boiled beef .

Time was up, they managed to make three traditional Korean food dishes. The five jurors were called to taste their cuisine.The five people came and occupied the table provided. They are Joe bloggers from America, Martina and Simon from Canada, Jennifer from America and Rob bloggers from Canada.

The first dish to be assessed is from the Red Team, the judges eat the food one by one. The taste of sauce from the red team doesn't seem too good. Yoo Jae Suk said that the sauce was made by Ji Suk Jin.

The second dish from Yellow Team was served. the impression of the judges seems rather good than the cuisine of the Red Team. The Blue Team gave their cuisine to be judged by the judges, they said that the meat was just a decoration not the main food. 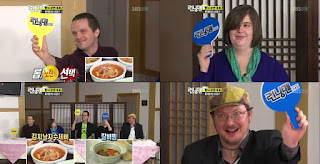 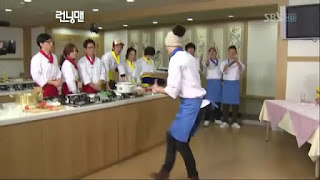 Rob chose the blue team, meaning that the blue team won the cooking contest and got the Running Ball prize. Nickhun enthusiastically took the prize.

Kim Jong Kook will face nine other people at once. Yoo Jae Suk said that he had considered this mission to be in his favor. But after thinking again about the mission, it was not profitable for him. 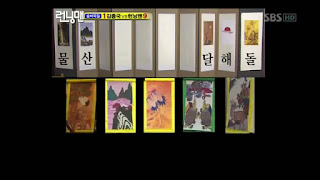 After getting the sms the location of their paintings immediately scattered to find the remaining five paintings. Yoo Jae Suk accidentally meets Commander who is preparing to make a chase. Yoo Jae Suk immediately turned around and ran away. 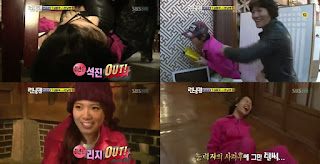 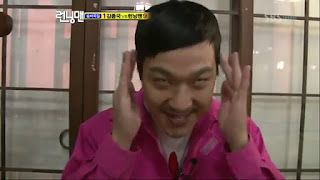 Ha ha at that time experienced conflict in his soul, he felt he had won a running ball and did not need to bother helping his team. He feels that he will be disturbed by Kim Jong Kook in the next episode, and that according to him is something that will not benefit him. Ha Ha turns into madman and decides to betray his team.

Lee Kwang Soo was caught while being hiding under the table, the traitor Ha Ha helped Kim Jong Kook eliminate Lee Kwang Soo. Nickhun was caught thanks to Kang Gary's eye glance which shows the direction of Nickhun's hiding place.

The last hero Yoo Jae Suk unfortunately did not succeed in completing the mission of collecting paintings he almost managed to collect everything, but there was one painting that was wrongly taken by the other members. Finally Kim Jong Kook, Ha Ha and Gary managed to become winners in this mission. The three of them an Nickhun managed to avoid punishment using Hot Pants. 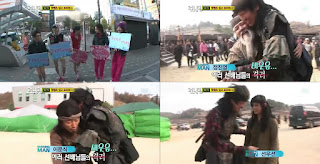 This time's sentence was that they had to ask for hugs from residents who passed in front of Myeong Dong station. Exception for Lee Kwang Soo he left for the filming location with wearing hot pants while asking for hugs from his seniors. End of episode.
Tag : Running Man