Running Man this time episode was held at the Korea Meteorological Administration. The place where the weather forecast is done in Korea. Kim Jong Kook mentioned a little about Ha Ha, since they were at KMA. Ha Ha is famous for his image as Pororo, a penguin cartoon character known by children

Yoo Jae Suk also asked Ha Ha who appeared with the image of the children after wearing clothes similar to Pororo. Ha Ha immediately changes his voice and behavior to be cute like a cartoon character. This episode is also the second episode of Lizzy appearing as a member. Song Joong Ki was not present because he was busy with the drama.

Yoo Jae Suk then asking if there was a special 1vs8 segment against him today. The other members looked surprised, it turned out that Yoo Jae Suk knew it from Ji Suk Jin manager, who carelessly said the information. Kim Jong Kook said, that there was indeed a 1vs8 mission but that it was not a secret mission so it would be fine if Yoo Jae Suk knew about it.

Suddenly someone appeared from behind and immediately walked to their center. Apparently he was the guest star of this episode Kim Heechul (Super Junior). He said that he was cold behind there and wanted to go straight in without being called.

Yoo Jae Suk welcomed Heechul and then moved the topic to Song Ji Hyo whose lips looked purple from being cold and wearing a thin shirt. Kim Heechul asks if Song Ji Hyo is drinking today, because his nose looks red.

The first mission begins, behind them there is a stage specifically reserved for digital weather broadcasts. The Running Man mission this time is the members will broadcast weather forecast on the prepared stage..

They will be divided into three teams and each team will only have one person who gets Running Ball.

The first team is preparing, they are Ha Ha, Song Ji Hyo and Kang Gary. They will be given five minutes to get clothes on the second floor as well as to take the weather report script to memorize.

The mission began, the three people immediately ran into the building to get the weather report text and clothes. Song Ji Hyo gets a set of clothes and pants while Kang Gari only gets the pants, then Ha Ha only manage to gets the clothes.

On the screen, Gary is doing a weather report, only half of his body looks on the screen. The three of them sequentially carry out weather reports. For every wrong word their faces blowed by a strong wind. 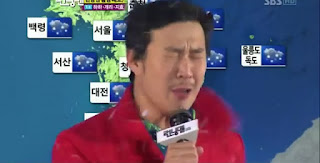 Among the three people no one has succeeded in carrying out the weather report perfectly. Ha Ha was seen being hit multiple time on the face with a strong wind.

As a result of the frustration of not being able to memorize the script, and his face was hit continuously with the wind. Ha Ha lost his mind he acted like a madman and laughed to himself on the stage.

The other members laughed at Ha Ha's funny behavior. The result of the first team no one managed to get Running Ball. 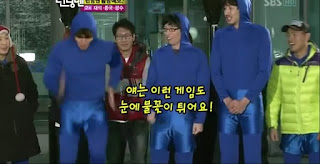 The second team prepares, they are Yoo jae Suk, Kim Jong Kook and Lee Kwang Soo. Yoo Jae Suk looks at Kim Jong Kook who is warming up and says he should be at the Asian Games not here with us.

The mission began, Yoo Jae Suk managed to get a set of clothes, while Kim Jong Kook only got clothes and Lee Kwang Soo got his pants.

Special for this team, water is sprayed from above like real rain. Kim Jong Kook got the first chance to do a weather report but he was replaced with Lee Kwang Soo because there was a wrong word spoken.

Lee Kwang Soo made the same mistake he looked nervous. Yoo Jae Suk arrived and replaced Lee Kwang Soo, he immediately did a weather report. However, Yoo Jae Suk at that time was unable to remember the text properly and looked a little frustrated because of the annoying artificial weather.

Next is Kim Jong Kook's turn, his face is hit by a strong artificial wind. He looks a little angry while throwing the script onto the ground. Lee Kwang Soo and Yoo Jae Suk were scolded by him. Yoo Jae Suk was even kicked slowly, so he could get out quickly because he said the wrong word.

Yoo Jae Suk counter back to Kim Jong Kook by disturbing him while doing weather reports. He looks like he is hairing Kim Jong Kook's hair.

The situation became even more chaotic, they looked like they were fighting on the stage. But Kim Jong Kook finally managed to make a perfect weather report and managed to get Running Ball.

Next team with different hair colors. Ji Suk Jin, Lizzy and Kim Heechul. Ji Suk Jin said that they would just walk, because at that time Heechul's leg was injured.

But the cunning ji Suk Jin runs very fast, like he is running he leaves far away Lizzy and Heechul.

Funny thing is that Ji Suk Jin passed the place where the manuscript was taken, he missed so far that his position became third.Lizzy in the first place managed to get one set of clothes. Ji Suk Jin only wears clothes, Heecul gets pants.

Ji Suk Jin did the weather report for the first time, he was very fast but once sprayed with water from above he looked cold, and forgot to memorize the script. 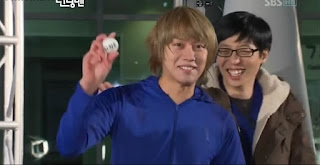 After doing a number of trials, Kim Heechul finally managed to make a perfect weather report. He has the right to get a Running Ball.

The mission finished they immediately changed clothes and entered the building to carry out the next mission.

The second mission is mission 1vs8, Yoo Jae Suk will face eight people. Here Yoo Jae Suk's body will be attached to a digital lie detector. Within half an hour he must endure the question and not lying, if he is caught lying three times he will lose.

The task of the other eight people is, in half an hour they have to make a question that can make Yoo Jae Suk tell lies answer three times.

But beforehand they will test the lie detector by using Ji Suk Jin as a trial subject. They will make questions related to his love with his wife. Because in the previous episode Ji Suk Jin said he loved his wife very much, so they would test the sincerity of his love with a lie detector.

The first question from Kim Jong Kook is whether Ji Suk Jin is jealous of Yoo Jae Suk's fame. Ji Suk Jin say no but it was found lying by a lie detector, he reasoned that his mind was out of focus.

Ha Ha's second question asks about his first love, has Ji Suk Jin ever thought about it. Ji Suk Jin's facial expression immediately changed to hear Ha Ha's question. He answered no, but found out lying by a lie detector. He really looks tense, it seems he is afraid of being found out by someone, maybe his wife.

The third question from Kang Gary, he asks if Ji Suk Jin feels happy when his wife is not with him. He honestly said no. But the lie detector says otherwise that he is lying.

Ji Suk Jin is angry, he forcibly releases the device from his body. the other members laughed at Ji Suk Jin's reaction.

Song Ji Hyo became the second person to be the subject of a trial lie detector. He managed to answer two questions correctly but when asked by Yoo Jae Suk about Ha Ha. He was found lying, at that time Yoo Jae Suk's question for Song Ji Hyo was is there not s slightest feeling she has for Ha Ha.

Song Ji Hyo denied it and his expression looked unpleasant. The machine really made her angry. 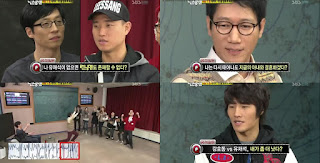 The real mission started, Yoo Jae Suk successfully answered the first question from Kang Gary. But when faced with Ji Suk Jin's question about his married life, Ji Suk Jin managed to make Yoo Jae Suk confused and detected  by the lie detector that he is not telling the truth.

Kim Jong Kook asked about Kang Ho Dong, Yoo Jae Suk reversed the situation by saying that he amused by the relationship between Kim Jong Kook and Yoo Eun Hye on the X-Man show, Kim Jong Kook looked upset. Other members encouraged him, at that time the question from Kim Jong Kook was answered successfully by Yoo Jae Suk.

Yoo Jae Suk answered the question honestly, he said no and proved to be honest by the detection machine. The other members celebrated it.

There are still a few other questions but in the end Yoo Jae Suk managed to win this mission by scoring twice a lie. He also got one Running Ball.

The next mission is the game of hide and seek. In the mission this time divided into two teams as usual. The task of the red team is to eliminate the blue team.

The Blue Team was given a mission to find 4 umbrellas scattered randomly in the KMA building. They will get a running ball if they can find all the umbrellas. 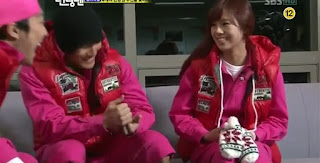 In the red team Lizzy is adapting to her new older brother in running man. She was seen doing jokes that were popular at the time with the hyung. And the hyung seem very enjoyed too. 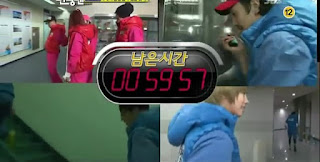 The Blue Team consists of Lee Kwang Soo, Song Ji Hyo, Yoo Jae Suk, Ji Suk Jin and Kim Heechul. they were given one hour to find all the umbrellas in the building. 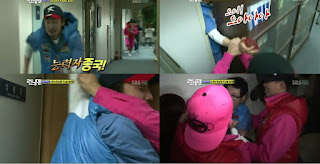 Lee Kwang Soo is on the seventh floor looking for a mission umbrella. Suddenly he heard the sound of bells from a distance. Lee Kwang Soo was curious, but as soon as he saw the figure of Kim Jong Kook chasing after him, Lee Kwang Soo ran away and hid in a room.

Lee Kwang Soo uses a disk to see the situation from inside the room. But unfortunately his stupid actions resulted in him being caught by Kim Jong Kook and successfully eliminated. 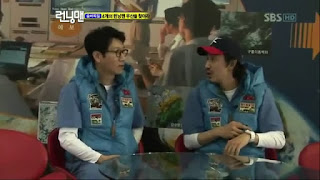 Ji Suk Jin, who is on the second floor with Yoo Jae Suk, is chased by Kim Jong Kook, they are separated. Ji Suk Jin was caught by Kang Gary, Ha Ha and Lizzy

Lee Kwang Soo, who was already in prison, asked Ji Suk Jin about Yoo Jae Suk. While pointing at his watch Lee Kwang Soo said that Yoo Jae Suk was a little late. They are holding a meeting in prison as usual.

At that time Yoo Jae Suk was fighting with Ha Ha, he managed to squeeze Ha Ha's nose and get out of a dangerous situation. But unfortunately Kim Jong Kook managed to capture Yoo Jae Suk. 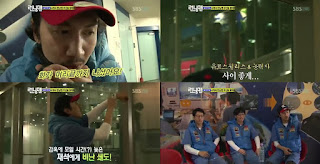 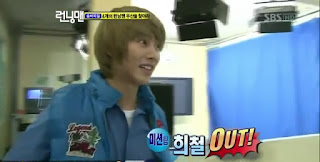 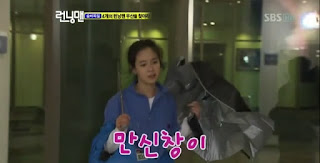 At that time Song Ji Hyo managed to bring one more umbrella, but the umbrella was broken. It turned out that Song Ji Hyo had been caught by Lizzy. The Red Team won the mission this time. 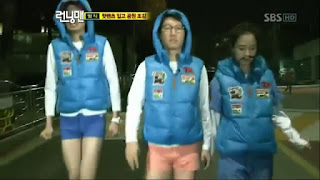 The three people who were punished were Lee Kwang Soo, Song Ji Hyo and Ji Suk Jin. The sentence was that they had to go to the park to jog in the early morning. End of episode.
Tag : Running Man