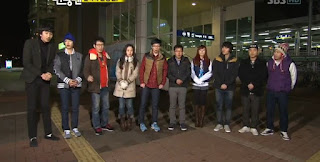 In this episode of Running Man at Gwangmyeong Station, the new station was built as a stop to the high-speed Korail KTX train operator, 22.0 km (13.7 miles) south of Seoul Station, and the invited guest stars this time is Kim Je Dong.

But the first mission was at Haeng Shin Station, the team was divided into 3 groups, the Red Team, Lee Kwang Soo, Song Ji Hyo, and Song Joong Ki, Blue team, Kim Jong Kook, Haha, Gary, and Lizzy, and the Yellow team, Yoo Jae Suk, Ji Suk Jin, and Kim Je Dong, the mission is they have to buy train tickets for go to Gwangmyeong Station and also buy drinks, all teams manage to enter the train on time and proceed to the second mission.


The second mission , the three teams must buy goods or food depending on the mission they get in the suitcase, each team is only one member who goes to do the mission, they have to buy it in 10 minutes, and if it's too late it will be eliminated. Each team's chosen members were, the Red team choose Lee Kwang Soo , Blue team choose Kim Jong Kook, and Yellow team choose Yoo Jae Suk  went to complete the mission.

Kim Jong Kook managed to arrive first, and behind him was Yoo Jae Suk, while Lee Kwang Soo went down next to the platform and the Red team was finally eliminated, where Song Ji Hyo was angry with Lee Kwang Soo, because they failed to get Running Ball. 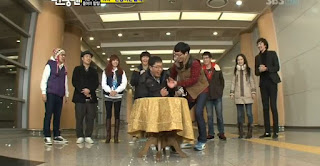 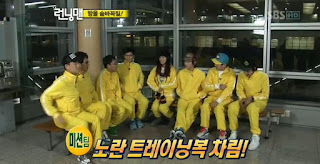 Search team mission is to be found 5 ticket hidden in Gwangmyeong Station area and given time for 1 hour to find it. 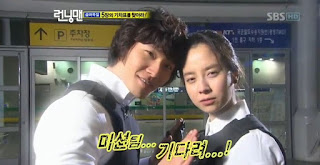 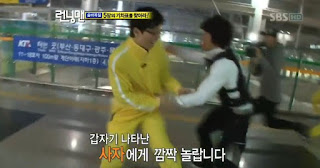 The search team split to make finding tickets easier, but just after the search team had been found by Song Ji Hyo, when Yoo Jae Suk, Gary, Lee Kwang Soo, and Song Joong Ki had just left the elevator, Kim Jong Kook was getting ready to catch them, and the first one to be eliminated was Yoo Jae Suk, he was caught by Kim Jong Kook. 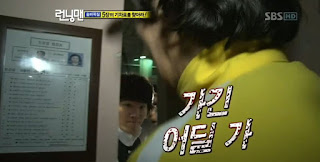 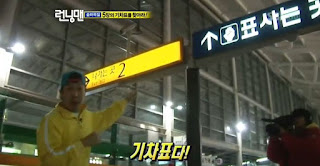 When still 50 minutes left, the search team was still trying to find in this vast area, and not long after that Haha managed to find a ticket, Lizzy also saw Haha picking up the ticket but because of the high location he couldn't pick it up to Haha's back and managed to get a ticket, there were still 4 tickets left. 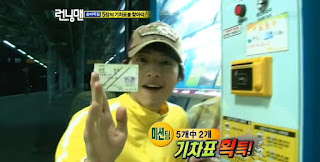 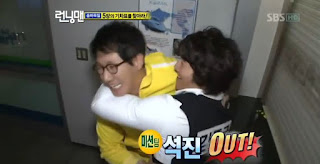 While looking for tickets Ji Suk Jin was found by Song Ji Hyo and after being chased she again told Kim Jong Kook use the walkie talkie to chasing him, and finally Ji Suk Jin was eliminated. 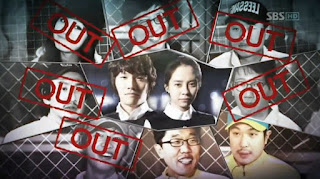 Not long after that Song Ji Hyo found Gary and Lizzy, and finally both of them were eliminated, the combination of perfect teamwork succeeded in eliminating 6 members quickly, remaining Kim Je Dong and Haha, they were still looking for other tickets. 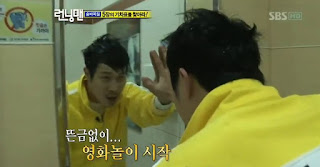 When only 15 minutes left to exchange tickets, Haha was just about to find a ticket but he was found by Song Ji Hyo and he was eliminated after Kim Jong Kook came to arrest him. 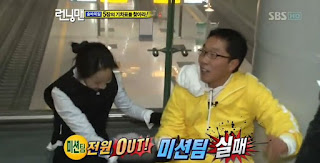 Now all that is left is Kim Je Dong, when he intends to intend to surrender because he feels it is impossible to find a ticket in this vast place, not long after that he meets Kim Jong Kook, and finally Kim Je Dong runs away, but Song Ji Hyo managed to catch him and finally he was eliminated, Kim Jong Kook and Song Ji Hyo managed to eliminate all members and they got Running Ball. 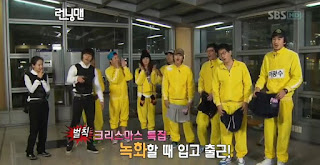 And finally Yoo Jae Suk, Lee Kwang Soo, Song Joong Ki, and Ji Suk Jin not getting Running Ball, they have to accept the punishment for using Hot Pants, but the punishment this time will be for the next episode, and this episode ends here.
Tag : Running Man