This episode of Running Man is at Alpensia Ski Resort, The Alpensia Resort (Korean: 알펜시아 리조트) is a ski resort and a tourist attraction. It is located on the territory of the township of Daegwallyeong-myeon , in the county of Pyeongchang , The ski resort is approximately 2.5 hours from Seoul or Incheon Airport by car, predominantly all motorway. From Seoul Cheongrangri KTX station (NE Seoul) as well as Seoul KTX station 1and half hour KTX Jinbu station newly-opened from Feb. 22, 2017 exclusively-built for PyeongChang2018. There are purple ski shuttle buses to the resort 3 or 4 times a day , and the invited guest star this time is Shim Hyung Rae. 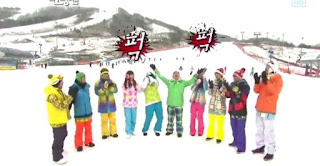 The first mission is the elevator quiz contest, 1 team representative will climb the elevator seat while asking questions to the team members, and they have to answer the quiz while running up the hill to the ski area, the team that answers the questions the winner and get Running Ball .

The first try was the blue team, Kim Jong Kook who climbed the elevator seat to give questions, Gary, Haha, and Lizzy answered the questions, and finally even though Kim Joong Kook shouted loudly they managed to answer 4 questions. 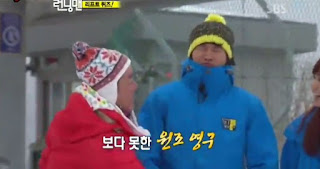 Before the yellow team started Shim Hyung Rae did slapstick comedy to Kim Jong Kook which finally made the Running Man members laugh.

The second one tried was the yellow team, Ji Suk Jin who climbed the elevator seat to give questions, Song Ji Hyo, and Song Joong Ki they answered the questions, and finally they managed to answer 5 questions. 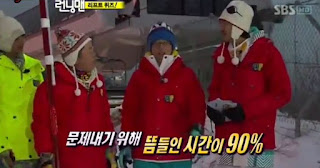 And the last one was the red team, from the beginning the game started Shim Hyung Rae was not serious about carrying out a mission, therefore Yoo Jae Suk, and Lee Kwang Soo, only managed to answer 2 questions.

And the winner of the first mission was the yellow team, Ji Suk Jin, Song Ji Hyo, Song Joong Ki managed to answer 5 questions and they got Running Ball. 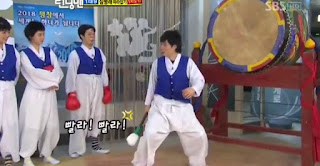 The first trial starts, Yoo Jae Suk turns first, he acts to hit the drum, but only hits his head, and the first try fails after he forgets to continue the dialogue 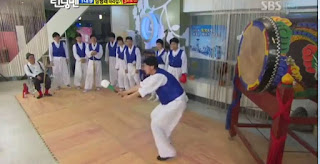 The second trialbegan, this time Yoo Jae Suk managed to qualify for the first stage, the second was Lee Kwang Soo, too bad he failed because acting too much looking back so that the drum in front of him missed, Shim Hyung Rae punished Lee Kwang Soo who made the Running Man members laughed. 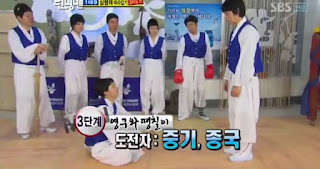 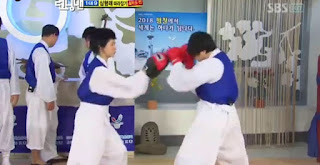 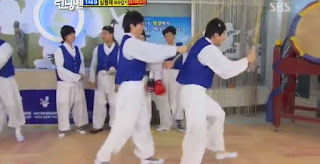 In the fifth stage, it is Gary and Lizzy's turn to try to pass the fifth stage once, and the sixth stage is Yoo Jae Suk and Ji Suk Jin's turn, but unfortunately they failed at this stage, and have to repeat the first stage, because Yoo Jae Suk is less clear say the dialogue.

The third mission began, this time the mission was to find 4 gold medals that had been hidden in the ski area and stick them to the snowman, the members' search team was Yoo Jae Suk, Ji Suk Jin, Gary, Song Ji Hyo, Song Joong Ki, Lizzy, and Shim Hyung Rae, who is the chasing team member is Kim Jong Kook, Haha, and Lee Kwang Soo. 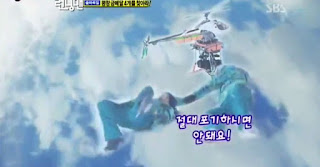 Haha and Lee Kwang Soo played as usual and acted hanging on helicopters as if they were playing action films, Song Ji Hyo managed to find the first gold medal when the search team was off guard, and after that Lizzy also managed to find a second gold medal.

Shim Hyung Rae was eliminated by Haha, because he was tricked into exchanging name tags, but instead tore his name tag and finally he was eliminated. 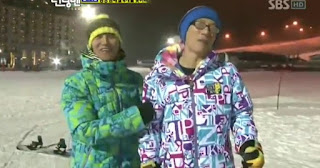 When it was 35 minutes old, when Yoo Jae Suk and Kang Gary planned to go to the top using an elevator chair, suddenly behind Kim Jong Kook appeared, panicking both of them, Gary managed to escape Kim Jong Kook's pursuit, when Yoo Jae Suk slid down Lee Kwang Soo and Haha were getting ready to catch him, and he was finally eliminated.

The remaining 15 minutes, the search team is still trying to find 2 gold medals, Song Joong Ki managed to find the third gold medal, and now there is only one gold medal to win the Running Ball, but not long after the search team members are caught one by one, and now the remaining only Gary but eventually he was caught by Kim Jong Kook, and the third mission winner was the pursuing team, they got Kim Jong Kook, Haha and Lee Kwang Soo. 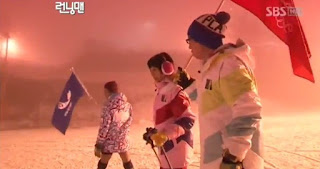 And this time the punishments were Yoo Jae Suk, Gary, and Lizzy, they used Hot Pants while skiing, that's the end of this episode.
Tag : Running Man