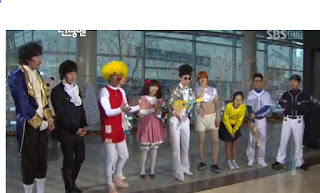 This episode of Running Man is at the Comic Information Center Museum, a historic museum place about ancient comics, which is still opened today, the invited guest stars this time Park Bo Young. 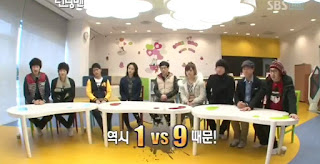 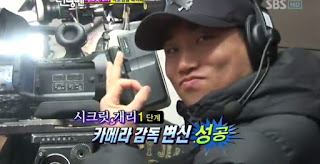 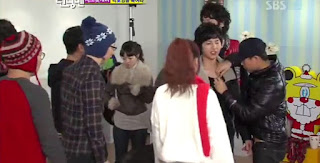 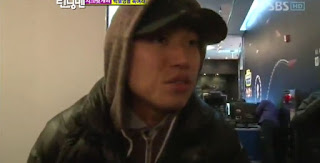 The third stage is Gary disguising himself as a production staff and he has to give drinks to the members, at that time the members of Running Man pretended to be thirsty and asked for staff to drink water, and the third stage Gary escaped.

The fourth stage is Gary disguised as a make-up artist staff, Gary put on powder to Song Ji Hyo, Haha, and Lee Kwang Soo, this is where Park Bo Young realizes that Gary didn't play fast quizzes, and even though in stage four he passes, at stage Five Gary was caught by Park Bo Young, Secret Gary's mission finally failed, and only Park Bo Young got the Running Ball.

This mission was Everyone come to the Manhwa house, the three teams would play in front of Manhwa's house while waiting for the sirens to ring, when the sirens sounded they had to enter the house holding hands, to sing with the manhwa theme prepared by Running Man Producer. 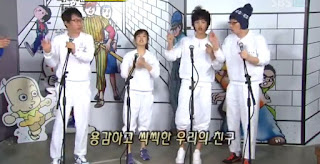 The first round began, the first team arrived first was the white team, they were given the opportunity to sing first, but they failed after Park Bo Young and Song Joong Ki were unable to sing the song correctly, then the red team, they also failed after only singing a few the sentence, after that the blue team, they also failed because they didn't memorize the lyrics, the three teams took turns one by one and the one who won the first round was the white team. 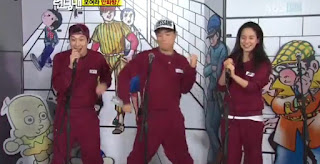 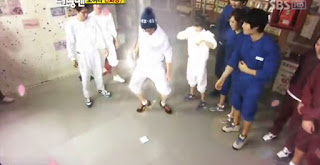 The third round began, this time they returned to playing ddakji, but it was the turn of the men playing, Yoo Jae Suk show his dance before playing game and the winner was the white team, they got their first turn singing, but failed again, after that one by one the team sang alternately and the third round won the white team , because the white team won 2 rounds they got Running Ball.

The third mission began, his mission was hide and seek to find 4 comic strips entitled "Little Red Riding Hoods hidden inside the Manhwa Museum, they were given an hour to find it, find the pieces and make them into comics, the search team this time the members are Yoo Jae Suk, Ji Suk Jin, Song Ji Hyo, Lee Kwang Soo, Park Bo Young, Lizzy, and Song Joong Ki, and the chasing team members are Kim Jong Kook, Gary, and Haha. 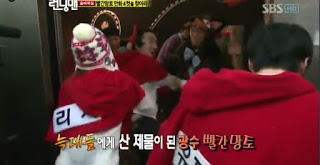 Just as the game started Ji Suk Jin was eliminated because he was caught by Gary, then on the other hand Yoo Jae Suk managed to escape from Kim Jong Kook's pursuit, Kim Jong Kook could not run well because his foot had a very large bell attached, not long after that Lee Kwang Soo was eliminated by Gary and Haha, he was pushed out of the elevator by Yoo Jae Suk and Lizzy to be sacrificed to the pursuing team. 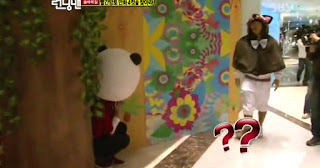 Remaining about 35 minutes to find 4 pieces of comics, Song Ji Hyo and Song Joong Ki managed to find the first piece, and soon Song Ji Hyo also found the second comic strip, but Song Joong Ki was eliminated by Kim Jong Kook after he failed disguised as a doll. 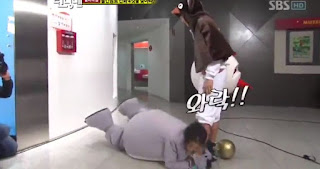 Now all that remains is Yoo Jae Suk, Song Ji Hyo, Park Bo Young, and Lizzy, they only need to find 2 pieces of comics to win the Running Ball, Song Ji Hyo disguised using a doll costume, but she was discovered by Kim Jong Kook, and that's when she begged to leave him this time alone, holding his feet she kept begging Kim Jong Kook not to be eliminated. 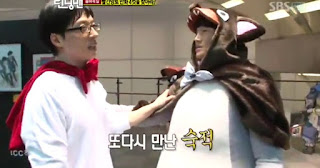 Yoo Jae Suk was finally eliminated by Kim Jong Kook after he cheated him twice, the remaining 15 minutes left, not long ago Lizzy was eliminated by Haha while he was looking for comic strips, now only the only remaining are Song Ji Hyo and Park Bo Young, they the two are still looking for the two remaining pieces of comics, after searching carefully Park Bo Young manages to find the third piece. 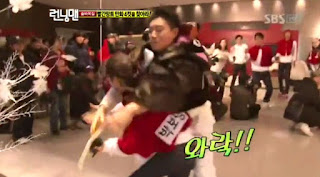 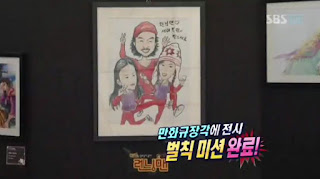 And this time the punishment was to become a Manhwa caricature model, the members who were punished were Song Ji Hyo, Lee Kwang Soo, and Lizzy, because they did not have Running Ball, the results of the picture would be placed in the Manhwa museum gallery, that was the end of this episode.
Tag : Running Man