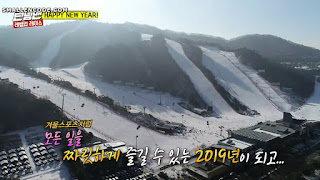 The six people who made the opening were Yoo Jae Suk, Kim Jong Kook, Ha Ha, Song Ji Hyo, Jeon So Min, and Yang Se Chan. While Ji Suk Jin and Lee Kwang Soo are still serving a sentence wearing a costumes with pig trinkets and distributing lots of pillows and pig dolls to visitors. 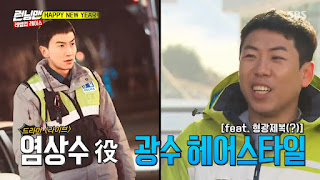 They are serving their sentences from the previous episode, while celebrating the golden pig year.Shortly thereafter, both of them joined the others. Before they arrived the other six members were busy discussing Yang Se Chan's new haircut. Jen So Min says that his haircut is similar to Yeom Sang Soo (Lee Kwang Soo's role in the drama Live (2018)) 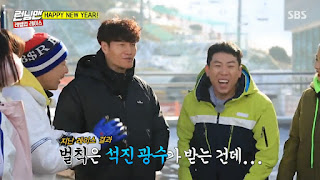 His haircut was widely criticized by his colleagues. Yoo Jae Suk said he could use the traditional method of using rice water to make his hair more fashionable. Song Ji Hyo ruffled his hair, Ha Ha and Kim Jong Kook teased him by saying that Yang Se Chan was like being penalized.

Lee Kwang Soo who just arrived even said his haircut was like a frog. Yang Se Chan did not look offended he smiled at the jokes of his friends. Then the conversation switched to Ji Suk Jin, this year Ji Suk Jin age will be 54 year. Kim Jong Kook said he would soon be 60 years old. 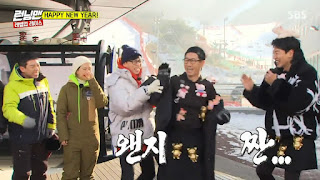 Yoo Jae Suk, who likes to joke, opens Ji Suk Jin coat that covers the embarrassing costume he wears. Ji Suk Jin said something about his friend who had become a director of a company. his friend is already successful and he is embarrassed because he still has to wear a costume like this. He was praised by Ha Ha because in his old age he was still active, and Ha Ha said that he was his role model. 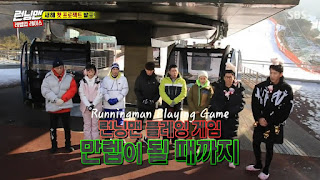 A PD tells them about the Running Man super large project in the beginning of the year , they named the project RPG (Runningman Playing Games) Untill Became Mankind. RPG is a genre of video games, generally tells the story of a character who must raise his level to defeat the enemy.

In this project the members will be like the character in video games, they will start the game from level 1, they will wear badges that match their level. Now all of them wear level 1 badges. The game will end if one of them reaches level 10, and the person will get a super prize.

To raise the level they must carry out quests scattered in the ski resort. They will start the first episode of RPG Project : Picture of Rice Cake Soup. There are eight ingredients or tools for making Rice Cake Soup. Their main quest are to collect eight items by doing a sub quest while trying to raise their level. They can raise the level by doing a sub quest or by eating a bowl of rice cake soup.


Each of them will ride the gondola train that located behind them, directly to the mission location. The first to go up is Ji Suk Jin he looks very happy to do a close up scene inside the gondola. 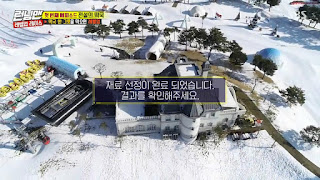 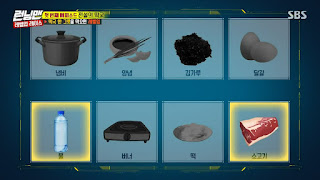 They arrived at the destination, they were asked to show their chosen card. Ji Suk Jin, Kim Jong Kook and Lee Kwang Soo chose the rice cake card. Jeon So Min, Yoo Jae Suk and Yang Se Chan choose the pot card. They cannot choose the same card. Now they only get two ingredients. That's ingredients are the meat that Ha Ha chose, and the water chosen by Song Ji Hyo.

This means they have to get six more item ( Rice cake, pot, spice / seasoning, seaweed powder, egg, burner )  to complete this first episode of the RPG project. The six items were hidden in various locations, they had to find them or do a quest in that location to get them. 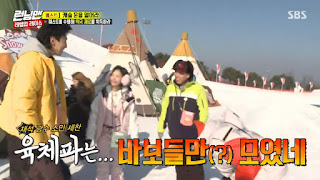 There are two methods given, they can get the password by breaking the code hidden in a piece of paper. Or the second way is to find the password in the area around the building. Kim Jong Kook, Ha Ha, Ji Suk Jin and Song Ji Hyo decided to break the secret code from the paper.

Meanwhile Jeon So Min, Yang Se Chan, Yoo Jae Suk and Lee Kwang Soo decided to look for the password that was hidden on location. But after a while they began to feel that they were a bunch of stupid people compared to Kim Jong Kook's group. Lee Kwang Soo tries to cheer them up by saying that they are not stupid but a group of active people. 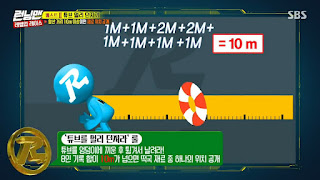 The quest are related to giant donut shaped balloon provided at the location. They had to shoot the balloon with their butts, then the total shots of the eight members had to reach ten meters. 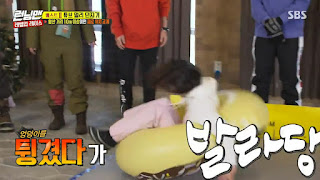 Next Yoo Jae Suk also fell in the same way. Between them Yang Se Chan was the first to find the right technique for shooting the balloon. 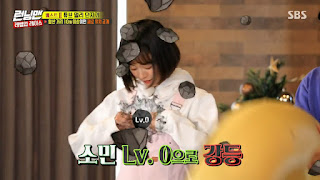 On the third trial they succeeded in completing the Quest. But unfortunately they failed in the first and second trials. After doing a draw Jeon So Min and Ji Suk Jin have to give up their badge to be able to play again the quest. The two of them went down to level 0 and used a level 0 badge. 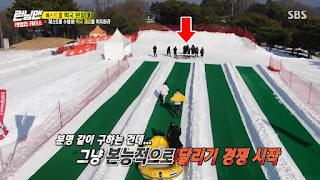 To get these items they have to ride one of the rides within Daemyung Vivaldi Park Ski World. At the end of this ride the staff has been waiting for them. Seeing something on the table of these two people running towards the staff.

Seeing there is a rice cake sop in front of him, Jeon So Min without hesitating immediately eat it but he is stopped by Lee Kwang Soo. Lee Kwang Soo sees Rice Cake next to the 2 bowls of rice cake soup. 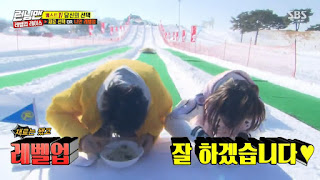 A PD asks them to choose between two, That is takes Rice Cake ( main quest item ) and be loyal to their friend or raises their level by eating two bowls of soup prepared for them and betrayed their friend.

They joined the other members, Yoo Jae Suk realized that Lee Kwang Soo had leveled up. Lee Kwang Soo blames Jeon So Min for eating the soup first. 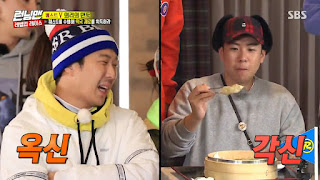 Yoo Jae Suk finds a new quest. It's like a game of loyalty, they will be given eight warm dumplings to eat. But they must determine the order to eat it. They exclude Lee Kwang Soo and Jeon Soo Min for acting selfishly. Jeon Soo Min gets seventh place, Lee Kwang Soo gets the final place. 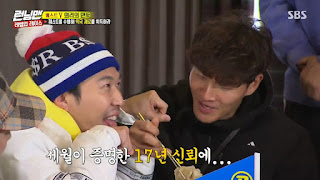 Even when PD asked them to send people who ate the most dumplings to pick up the main quest items. He managed to influence Yang Se Chan to take him down to pick up the item. 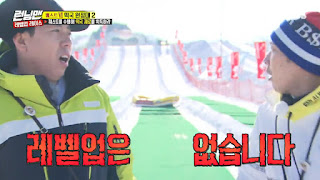 They both intend to betray their teammates by raising their own level, as was done by Lee Kwang Soo and Jeon Soo Min before. But these two traitors, their luck is not as good as the two of them.

They were both disappointed because after riding the ride they both did not get what they wanted. They are only given a pot (main quest item) only. 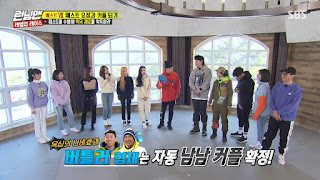 Meanwhile Yoo Jae Suk and the others found the Apink girl group on the second floor. After seeing Apink dance and sing their latest single. The six of them get a bonus leveling up because they have succeeded in finding Apink.

Lee Kwang Soo rises to level 3, Yoo Jae Suk, Kim Jong Kook, Song Ji Hyo and Jeon So Min go up to level 2, Ji Suk Jin rises to level 1. To play the next quest they must pair with Apink members.

Kim Jong Kook said something about Bomi, he said that Bomi was slimmer than before. Ji Suk Jin who once felt Bomi's kick said that her kick would not be as strong as it used to be. He was willing to accept back Bomi's low kick. 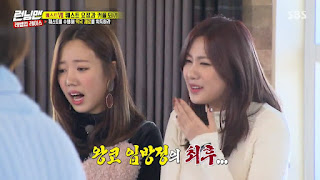 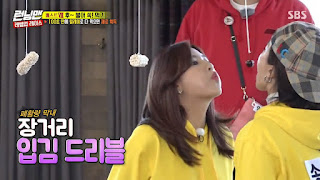 They will do 2 couple quests. The first quest to get an item, one of them has to blow the snack that is hung, and the partner will try to eat it. All of them must succeed in eating the food within 100 seconds.

They failed on their first attempt, Yoo Jae Suk dropped one level. On the second attempt they managed to eat all of the food and almost failed for the second time. They managed to get a burner (main quest item) 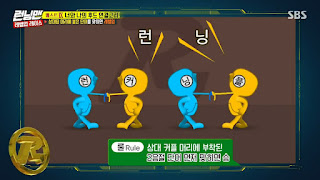 The second quest to raise the level, they will fight each other and the last to be the winner will level up. They did the draw, Kim Jong Kook and Na Eun went straight to the semifinals. In this second quest requires a strategy, they must find a way to see and combine letters that are attached to the opponent's hoody. 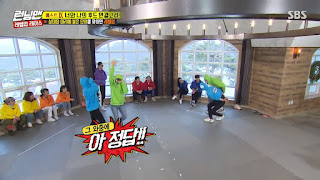 This game requires good cooperation with their partners. Ha Ha and Yang Se Chan have the advantage of working together they managed to defeat other pairs easily. But unfortunately in the final round they were defeated by Kim Jong Kook and Son Na Eun 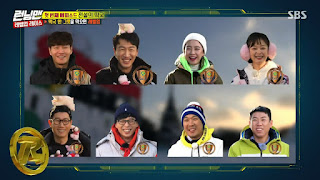 After the second quest finished, Apink resigned from the show. Kim Jong Kook and Lee Kwang are temporarily at the top. They are at level 3. Ji Hyo and So Min are at level 2. Ha Ha, Jae Suk, Suk Jin and Se Chan are currently at level 1. 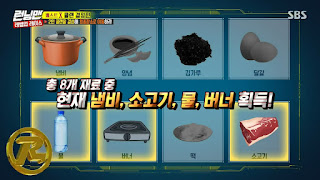 Of the eight items, they currently get four items. They need four more items, seasoning, seaweed, egg and rice cake. A PD said they had hidden an item card at a nearby ski resort location. They have to look for it.

The other requirement is that they have to make a clan with 2 members, and both must have an item card. So because there are only 4 item cards hidden. People who don't get item cards will pair up with each other. So among 8 members, 4 clans will be formed. 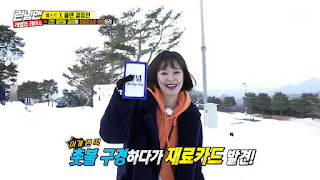 They split up looking for the card. Jeon So Min and Ji Suk Jin are the first to find the card. But Jeon So Min doesn't want to partner with Ji Suk Jin, he wants to form a clan with trustworthy people like Kim Jong Kook. 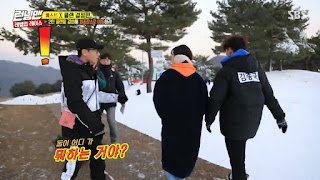 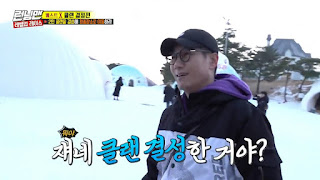 The oldest Ji Suk Jin member was ignored by the two of them. He could only see them from behind. He also decided to join Lee Kwang Soo, because at that time Lee Kwang Soo had found the last card. 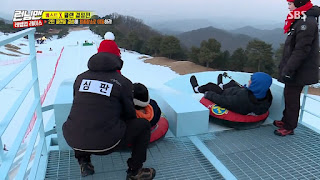 They then followed Kim Jong Kook and Jeon So Min who had already ridden the ice rides. They all sliding down to the place for making rice cake soup prepared by the staff. 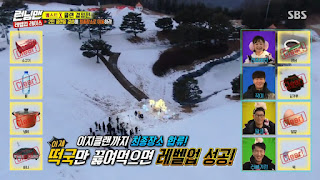 While waiting for Lee Kwang Soo and Ji Suk Jin, Jeon So Min did a selfie assisted by Kim Jong Kook. The background of the tree filled with lights made him want to be selfie in that beautiful spot. 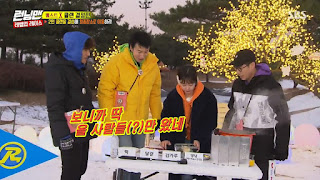 Finally the two cowards arrived, they prepared to cook. Jeon So Min puts all the spices in the pot. Once cooked, the four of them ate the soup and leveled up. 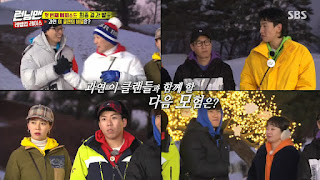 Yoo Jae Suk joins Ha Ha, Yang Se Chan forms a clan with Song Ji Hyo. Eight of them are asked by PD to remember their partner, because it will affect the next race. End of episode.

I would also motivate just about every person to save this web page for any favorite assistance to assist posted the appearance. dm screen