Before that, the Running Man members won awards at one of the awards events, the members who won awards were Song Joong Ki, Lee Kwang Soo, Song Ji Hyo, Kim Jong Kook, and Gary. 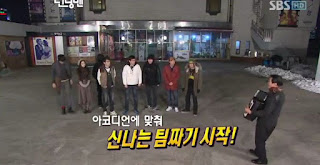 Not long after that, the Running Man member was divided into 3 teams accompanied by an accordion (a type of musical instrument), the red team members were Yoo Jae Suk, Haha and Ji Suk Jin, the yellow team members were Gary, Song Ji Hyo and Song Joong Ki, and the Blue team members are Kim Jong Kook, and Lee Kwang Soo. The three teams were given an hour to find guest stars. 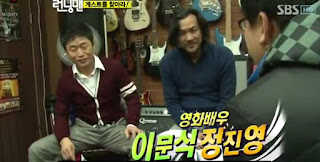 The guest stars this time are Jung Jin Young and Lee Moon Sik, they are also given a mission to deliver goods in 1 hour, if successful they will get a running ball. 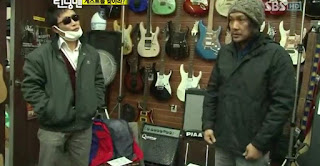 Jung Jin Young and Lee Moon Sik are getting ready to carry out the mission, they disguise themselves in inconspicuous clothes so as not to get the attention of people, Jung Jin Young's mission is to deliver the box to one of the shops and eat together with the staff there, while for Lee Moon Sik, his mission is to take money at an ATM of 30,000 WON, and buy a triangle.

Just starting Jung Jin Young was walking while pushing the box, he heard a bell and then panicked, as he turned intending to avoid the sound of the bell he met Yoo Jae Suk and Haha, and finally he was caught by the red team, but he got away because the bracelet on his arm was not torn by the red team. 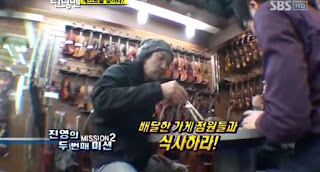 After almost being eliminated at the start of the game, Jung Jin Young managed to deliver the box and eat with the staff who were there.

When Lee Moon Sik was walking to buy a triangle, Song Ji Hyo managed to find it and finally he was caught by the yellow team, and not long ago Jung Jin Young was also caught by Haha from the red team and who got Running Ball were the Red team and Yellow team.

The second mission is singing, what's interesting is that they will sing famous songs from all over the world, the ones who sing the song correctly are the winners, the winners will get Running Ball.

The first song was Lambada from Brazil, the members finally wrote the lyrics they heard and tried to sing it, the blue team tried to sing the song but unfortunately failed, because too many words were wrong.

The second tried was the red team, they also failed to sing the song because there were too many wrong words, the red team even prioritized their dance 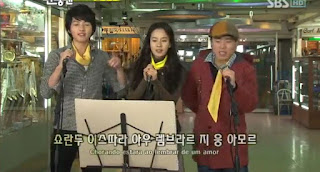 The third tried was the yellow team, they smoothly sang the Lambada song, to the surprise of the other team and finally they managed to sing the first song, the yellow team got 1 point. 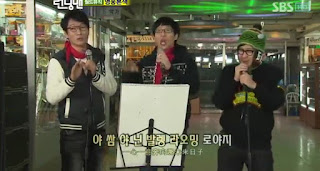 The second song is Rush Toward Future Day, Yoo Jae Suk is very familiar with this song, because this song is a movie sound track he likes, the first one trying to sing this song is the blue team, but they failed again, because the lyrics were wrong, the second tried was yellow team, they almost succeeded in singing the song, but failed because of the wrong lyrics at the end of the song, the third tried was the red team, Yoo Jae Suk memorized the song, finally this time the red team got 1 point, while the score was 1: 1: 0. 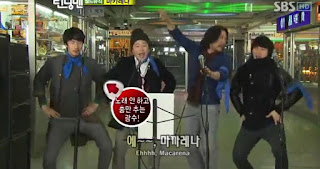 The third is the Macarena song from Spain, the first one to try is the red team, with an entertaining dance they failed to sing the song, because too many words were wrong, the second tried was the blue team, they also failed because Lee Kwang Soo didn't sing , instead busy busy dancing to the rhythm, the third one tried was the yellow team, they also failed because Gary only focused on approaching Song Ji Hyo, Gary's left turn dance should go right facing Song Ji Hyo, finally the Running Man members laughed seeing him . 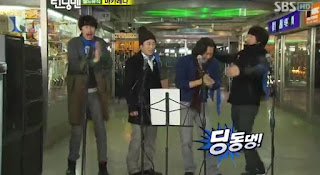 In the second trial the blue team finally managed to sing the Macarena song correctly, they got 1 point, the current score is 1: 1: 1. 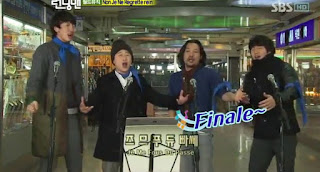 The third is the song Rein De Rine, this is the last round, the one who managed to sing the song correctly is the winner, the first one to try is the blue team, they sing with full appreciation, but they still fail because the lyrics are wrong, the second tries is the red team , they also failed because of the wrong lyrics, the third tried was the yellow team, they also failed, after trying several times the blue team finally managed to sing it correctly, and the second mission winner was the blue team, they got Running Ball. 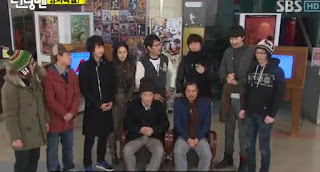 The third mission is that the team will be divided into 2 and Jung Jin Young and Lee Moon Sik will choose whatever they want, each team must try hard to convince them, the red team members are Yoo Jae Suk, Ji Suk Jin, Gary, and Song Ji Hyo, while the blue team members are Kim Jong Kook, Song Joong Ki, Lee Kwang Soo, and Haha. 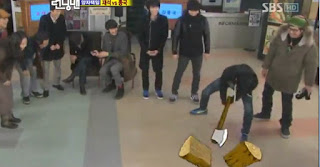 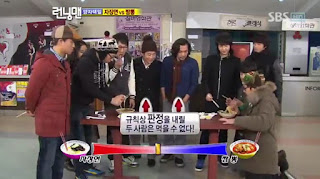 And one week later, because their names did not come out from Running Ball Machines, Ji Suk Jin, Yoo Jae Suk, Gary, and Song Ji Hyo, they finally had to receive punishment using red trousers and go to the arts center by bus
Tag : Running Man